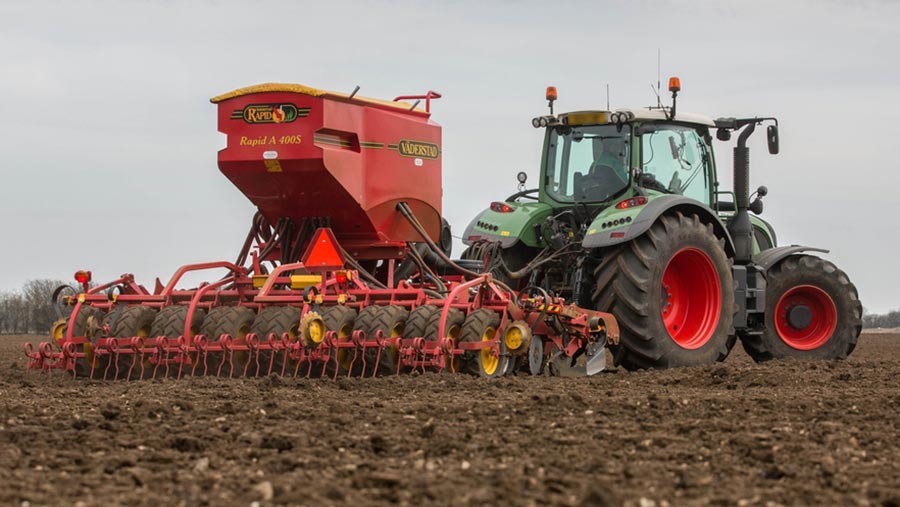 From Cornwall to Scotland, spring drilling is well under way in many parts of the UK and Ireland, with barley, wheat, beans and even some potatoes and onions being planted as drier, warmer conditions prevail this week.

Growers are making storming progress in typically early-drilling areas, such as the free-draining chalklands of Dorset and the lighter, sandy soils of Nottinghamshire.

Meanwhile, drills are being readied in Norfolk, Lincolnshire, Wiltshire and Ireland, with seed-bed preparations and final glyphosate applications for blackgrass control going on.

We have compiled the tweets below as an early indication of spring drilling progress around the country.

A weekend well spent – drilling concerto spring barley on one of our farms! pic.twitter.com/WvXIjcj5Zx

Started drilling light land Spring barley today in good conditions. Heavy land will have to wait a bit longer though!

View from the office at last pic.twitter.com/dqvYOZXN0T

Got some dust this morning drilling mulika spring wheat pic.twitter.com/q3OXOda5gR

Glorious day drilling spring barley, great to be out on the land. More of the same tomorrow please! #farmpics #drone pic.twitter.com/yYj0Aw3a7Q

Start of spring drilling not far away elsewhere

Killing a little bit of blackgrass ahead of spring drilling…. pic.twitter.com/cggBjCQTdx

A few more days like this and we shall be thinking about spring drilling. Forecast says dry all week. What to plant for profit? Key question

Land ploughing up well for Boxer spring beans. Should stack up well vs spring barley & freshen up land #rotation pic.twitter.com/7p43xqdawO

But other growers will need to be patient

Well that has thrown a spanner in the works. Spring drilling weather….. #flood #agronomy #ukweather pic.twitter.com/KgyN00poV8

Today will not go down as a good day… pic.twitter.com/DF7scbag35

Keep the Farmers Weekly arable team updated on your spring drilling progress and send in your photos via Twitter by mentioning @FarmersWeekly in your tweets.