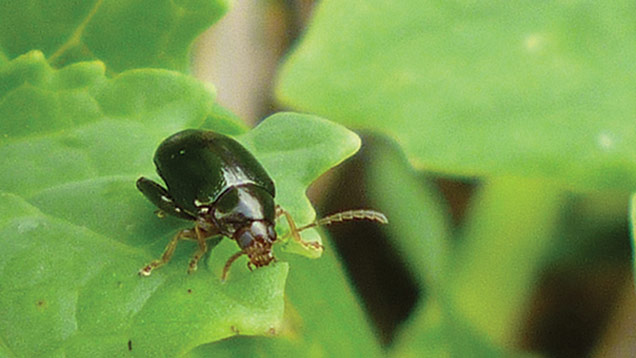 Losses from flea beetle were lower last autumn than the previous year, according to AHDB estimates, totalling to 6,000ha.

About 1% of the UK oilseed rape area was lost to adult cabbage stem flea beetle activity last autumn, lower than in autumn 2014, where losses amounted to 2.7% of the crop.

A total of 62,000ha was assessed in a survey using AICC agronomists, which equates to about 11% of the total UK winter rapeseed area.

In 2015, crops that were drilled earlier tended to move through the vulnerable periods more quickly, she said. In 2014, a similar observation was made.

Miss Nicholls added: “We have a growing body of evidence that shows that once oilseed rape has emerged it can tolerate severe defoliation in good growing conditions.

“All the evidence points to the importance of giving crops the best possible start in life.”

However, she stresses that care has to be taken when making direct comparisons between years, as different methodology was used.

“Once again, we asked a 56-strong network of agronomists to report on crop damage and loss across 42 counties in England, Wales and Scotland.

“But unlike 2014, where crops were assessed over a seven-day ‘snapshot’ period, the autumn 2015 assessment was linked to crop growth stages.”

Assessments were made only on crops drilled without neonicotinoid seed treatment.