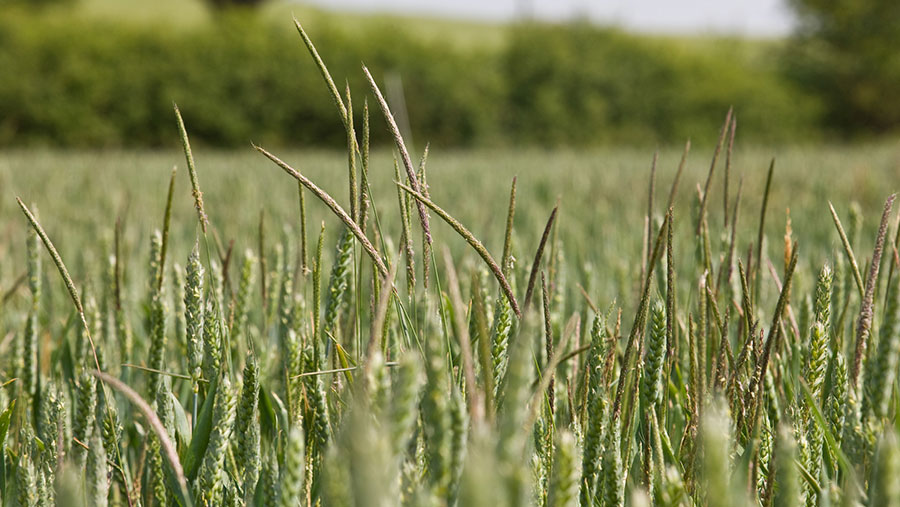 Overuse of herbicides has led to such high levels of resistance in blackgrass that the only solution to the rising weed problem is to completely change management practice.

That is the conclusion of new research conducted by the University of Sheffield, in collaboration with Rothamsted Research and the Zoological Society of London, into the factors driving herbicide resistance.

The team mapped the density of blackgrass populations across 70 farms in England, collecting seed from 132 fields.

Glasshouse tests revealed that 80% of sampled populations were highly resistant to all herbicides that can be used for selective blackgrass control in a wheat crop.

“Field monitoring indicated that the level of resistance to herbicides was correlated with population density, indicating that resistance is a major driver for blackgrass population expansion in England,” said Paul Neve, leader of Rothamsted’s Smart Crop Protection programme.

“We also found that the extent of herbicide resistance was primarily dictated by the historical intensity of herbicide use, and that no other management factors had been successful in modifying this resistance risk.”

Mixing different chemicals or applying them cyclically did not prevent resistance developing, added the report, published in Nature Ecology & Evolution.

Despite the challenges, the report says there is a belief that new compounds will become available. But it concludes that, with resistance developing over a short timescale, there is a real need to change farm practices.

Control of blackgrass in the future must depend on management strategies that reduce reliance on chemicals, say the researchers.

Including more spring cropping in a rotation is one option, according to Dr Neve, as blackgrass is less successful in spring crops than in winter crops.

“A less palatable solution might be to put fields down to grass for a period, as blackgrass seed only survives in the soil for two or three years,” he added..

Delaying drilling in the autumn may also provide a wider window for blackgrass to emerge, which may then be sprayed off with glyphosate.

But the researchers do express concern that even glyphosate could lose its effectiveness, noting that resistance has now been found in eight countries.

“How long it will take for resistance to glyphosate to become near universal is uncertain, but in evolutionary terms it is inevitable, unless standard management practices change.”

Dr Neve also points to emerging research and development, including a new hybrid barley variety, which is seemingly good at supressing blackgrass without the need for chemicals.

A new combine harvester is also being developed in Australia, which has the ability to crush blackgrass seeds before they are thrown out the back of the machine.