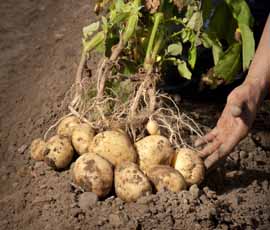 Timing is crucial to being able to take advantage of opportunities to reduce nitrogen inputs in potatoes, while maintaining yields, growers heard at the Potato Council’s winter forum.

“Yield is predominantly controlled by nitrogen uptake and the key question is ‘how can we use nitrogen more efficiently?'” Marc Allison, of Cambridge University farm, told growers.

Reducing the total nitrogen applied not only reduced fertiliser costs but had the potential to increase yield, he explained.

“We made comparisons between the standard RB209 recommended rate and a reduced rate of 30-40kg/ha.

“Although the increases we found in trials were not hugely significant, there were still clear benefits.” said Dr Allison. “It’s a win-win situation.”

But timing of nitrogen application was vital to ensure the crop was utilising the nutrients efficiently, he said.

“The majority of nitrogen uptake is in the early stages of growth. In trials, we have seen a rapid decrease in the uptake of nitrogen from around 20 days after emergence, therefore any nitrogen applied after this time may not contribute significantly to yield,” said Dr Allison.

“Results show the greatest yield is achieved when most, if not all of the total N is applied at planting, with a second dressing applied no later than emergence,” he added.

“Later application can result in the crop putting too much into haulm production and also delays the onset of tuber bulking, which is very difficult to get back later in the season.”

High applications of nitrogen at planting can increase the risk of losses through leaching, but this was something that didn’t concern Dr Allison.

“The risk of leaching is low, with the probability of a significant rainfall event that could cause loss of N after planting being quite small,” he said.

The key was to get nitrogen exactly where it was needed and when the plants were most likely to use it, said Dr Allison. “If we limit the nitrogen uptake early on we are limiting yield potential.

“Compaction has a negative impact on root development so this will limit early N uptake,” he said. “Pest and disease pressures will also disrupt this process and subsequently lower yield potential.”

Fertiliser placement at planting and top dressing is also an area where efficiency can be improved. Nitrogen can be left in wheelings, where it will not be taken up by the crops root system.

“If we can keep nitrogen out of furrows, we can increase the efficiency of nitrogen use which can be coupled with an overall reduction in the use of fertiliser,” said Dr Allison.