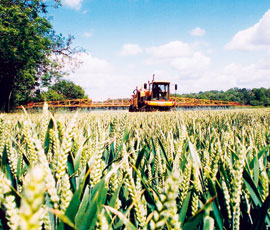 “But you need to know what protein level you are starting out with. If it is 9%, then you are not going to get anything near the 13% level and will be a waste. And if it is nearly 13%, you could end up too high.”

To address this, ADAS has being investigating whether it’s possible to predict grain protein level by using Near Infra Red Spectroscopy (NIR), thereby predicting the amount of extra foliar nitrogen needed, if any, to ensure the crop hits the 13% target.

For the past three years, whole crop samples have been taken at three stages between ear emergence and harvest.

Early results from more than 200 fields sampled in 2007-09 show there is a relationship between nitrogen content at the milky ripe stage and final grain protein. “But there is a huge amount of variation,” said Mr Sylvester-Bradley.

Assuming ear analysis costs £36 per field, using the strategy gave a net milling premium of £35/ha, while taking no action gave £30/ha. “Ear NIR does help improve grower skills, but it is still too expensive for individual growers.”

He is now looking at how it can be applied, perhaps grower groups or a national system.

In another part of the trial, he looked at NIR fitted to a combine, to look at in-field variation. The resulting protein map showed huge differences in crop nitrogen ranging from 10-16%.

“We didn’t expect to see big differences, but we saw them. We found areas that didn’t need any extra foliar N and some that did.”

Damage from a single rabbit is costing wheat growers £16/ha, according to Natural England.

Speaking at the conference, Peter Riley of Prime Agriculture highlighted the high losses caused by the pest, which equated to more than £50m annually in cereals alone.

“It’s frustrating seeing growers invest £900-1200/ha in direct costs and then let them eat it. There is considerable grower complacency and it also has an impact on grain consistency.”

Now in its second year, the Milling Wheat Challenge, organised by nabim and Crops magazine, sets out to find the top grower and highlight the great job these professionals do.

So if you think you measure up, then a few minutes answering the questions and filling in the form online at www.fwi.co.uk/nabimchallenge could pay dividends.

Three finalists will be wined and dined at the Ritz Hotel in London and the winner will receive a trophy and all the prestige that goes with being the UK’s Milling Wheat Challenge champion.