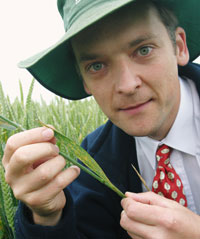 In the HGCA trials that allowed the products to be clearly better than the single azole fungicide standards of epoxiconazole and prothioconazole in both protecting against septoria and as eradicants, particularly at lower doses.

A lot of that increased efficacy was probably down to the increased azole loading, he suggested. For example, half doses of each product were applying just under the equivalent of a full dose of azole fungicide, and were being compared with a half dose of the single azole products.

But not all of the extra activity could be put down to that loading, he noted. Matching percent septoria infections against units of azole applied showed the new fungicides still performing better than Opus (epoxiconazole). That was a surprise, Mr Blake said. “The formulation is clearly better than the mixture would suggest. They have done something with the formulation that improves performance.” 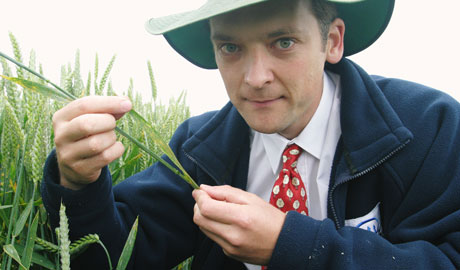 The trials also confirmed that Proline (prothioconazole) and Opus performed similarly against septoria as in past years.

Yield results from the trials also showed an advantage for Brutus and particularly Ennobe, although Mr Blake suggested growers shouldn’t read too much into Ennobe’s advantage after just one year’s trials.

In the brown rust trial Brutus also gave the best performance, Stuart Knight of The Arable Group said. “It is a step up for brown rust control.” Again, part of that higher efficacy is simply due to the high loading of azole fungicide, but Mr Knight pointed out the half dose of Brutus performed better than a full dose of Opus.

Ennobe wasn’t included in these trials, as it was seen more as a septoria product and because there wasn’t space to include every product, he added.

Proline’s relative weakness against brown rust was again highlighted by the 2008 trial, although the product is similar to Opus against yellow rust, unless the season is very challenging. The addition of fluoxastrobin to prothioconazole in Firefly or Fandango added massively to brown rust control, he noted.