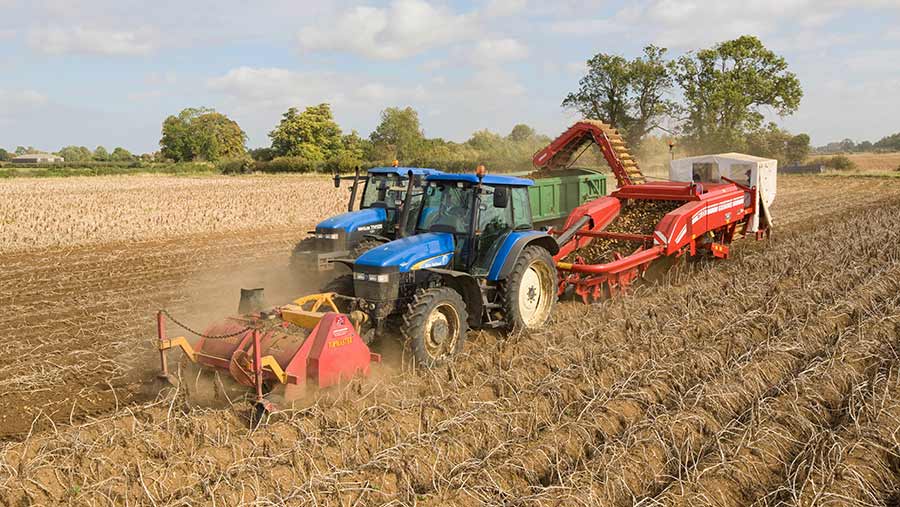 Potato yields in the UK appear to be faltering and one expert believes a yield competition like that seen with wheat could help the sector get closer to three-digit yield figures.

Yield data from the AHDB suggest there has been a slowing down in the rate of increase in yields. This is in contrast to the sugar beet sector which is still seeing a strong upward trend, with a 2017 average of 83.4t/ha.

While AHDB figures show the 2018 potato crop averaged 41.7t/ha, NIAB CUF head David Firman points to the huge variation between crops, with some yielding above 80t/ha.

Looking around the world, Washington state in the USA is a standout performer, with an average above 70t/ha.

And triple-digit yields have already been seen in the UK. An irrigation trial in 2013 achieved 125t/ha with the variety Volare, although Dr Firman says that came at the expense of dry matter content.

He believes the more impressive performance was for a 114t/ha crop in a Washington State University variety trial, equating to a dry matter yield of 26t/ha.

“It shows that there is an opportunity to increase yields considerably,” he says.

So what are the factors that could be holding back yields?

Dr Firman picks soil physical conditions as the top contender, as some of the biggest yield differences have been seen in trials comparing compacted and uncompacted soils.

Compaction is a particular problem for potatoes because of the impact on root development.

The rate of N uptake peaks about 25-30 days after emergence, and is typically twice the maximum rate seen in wheat crops.

That’s one reason why soil compaction can have such an impact on yields. “Crops [in compacted soil] start to starve themselves of nitrogen,” he says.

Simply applying more nitrogen to raise yields is not going to help where compaction is impeding uptake.

Dr Firman believes another key factor is irrigation, as a substantial proportion of the UK area is not irrigated.

The latest AHDB survey shows only 53% of the land in Great Britain planted with potatoes in 2018 had access to irrigation.

He points to reference crop trials, which over the years have shown a potential loss of more than 10t/ha without irrigation, and sometimes higher in more extreme seasons. 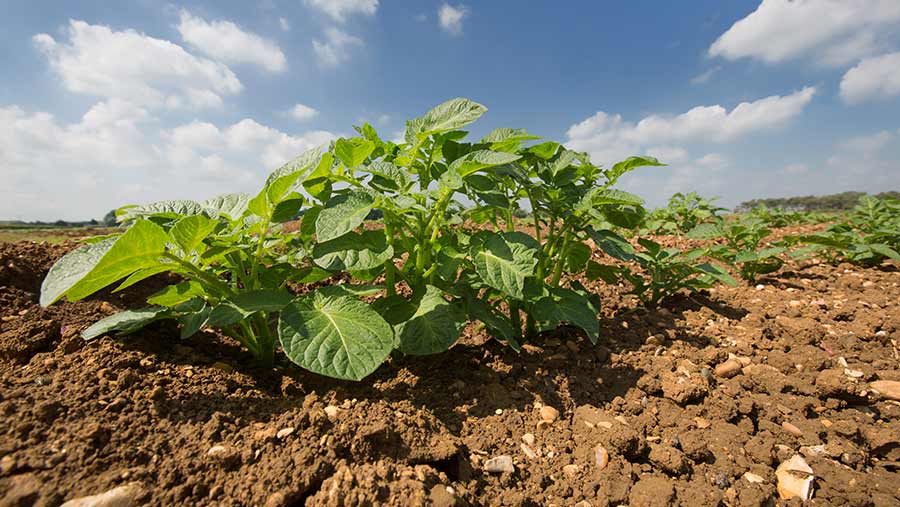 Typically, being able to irrigate with 25mm every five days would satisfy 94% of the potential need for water.  However, there is no real advantage in irrigating daily in hot seasons, and 98% of the yield potential could be realised by irrigating with 12mm doses every two days.

Another possible factor is the drive for market specifications, as growers focus on tuber size and dry matter content.

For salad crops, farmers grow tubers until they reach a size specification, so the crop is not allowed to reach its maximum yield.

Similarly, processing crops, which account for 29% of the total area, are grown for a higher dry matter content because of fry quality, which has an impact on fresh weight yield.

A good illustration of how the different market sectors can distort figures is when looking at regional yields – with Scotland down the regional rankings.

“However, Scotland has the highest yield, if you remove seed crops from the data,” says Dr Firman.

Variety may also be a factor, with older varieties accounting for a big proportion of the area at the expense of newer, higher-yielding ones.

For example, Maris Piper is still the most widely grown variety, having been around since the mid-1960s.

Another example of varietal effects is seen with rooting, with Estima giving bigger yield responses to irrigation compared with Cara. Dr Firman suggests this is because Cara has a bigger root system, helping it cope better in dry conditions.

The continued loss of pesticides could also be holding yields back, and the recent loss of diquat is not going to help.

There is a perception that there is a worsening potato cyst nematode problem in Britain, but Dr Firman points to data from the most recent PCN survey suggesting this is not the case.

“In fact, it showed a reduction in the affected area,” he says.

A partial solution to the pesticide losses could be biopesticides, and the most familiar product for potatoes is Bayer’s Serenade. Potato farmers can already use the product under an extension of authorisation for minor use, although Bayer hopes to gain full approval soon.

While it has already proven itself in drier areas of the world, trials have been carried out in wetter, colder soils as part of the approval dossier.

Trials in north-west Europe gave a 1.9t/ha response, equating to a 5% yield increase. Tuber quality benefits have also been seen with a 30% reduction in silver scurf.

Another example is the use of biofumigant crops to help manage potato cyst nematode populations in soil.

AHDB arable knowledge exchange manager Bill Watts has carried out a series of trials looking at how to maximise PCN kill and he achieved a 40% reduction with what he describes as “not the best crop.”

He has seen reductions in other trials approaching 60%.

Dr Firman notes that the sugar beet sector recently launched the Beet Yield Challenge, which is looking to identify the factors behind high-yielding crops.

It mirrors the Yield Enhancement Network, launched by ADAS six years ago, which is helping to identify how to raise wheat yields.

Dr Firman says there have been discussions with AHDB about a possible Potato Enhancement Network.

“Perhaps it is something that the industry should consider to help drive improvements.”

There is a perception that applying more fertiliser will help drive up potato yields, but the evidence suggests the opposite maybe true.

Marc Allison points to strip trials with 22 crops which showed that an improved approach delivered a yield of 61t/ha compared with 56.4t/ha for the standard treatment.

What was interesting is that the better yield came despite the crop receiving 168kg/ha of nitrogen compared with 196kg/ha for the standard. 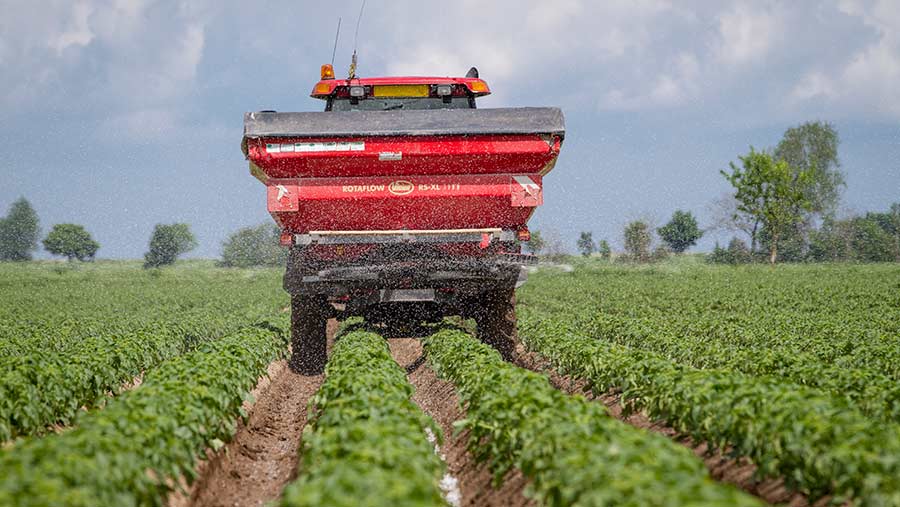 “Effectively, we got 4.6t/ha extra yield with 28kg less nitrogen,” he says.

He believes this was due to nitrogen being over-applied, with the rate shifted back to the optimum.

“The RB209 gives a range and perhaps farmers are going to the top end adding in some insurance, but this could actually be costing some farmers lost yield,” he says.

“I’m not suggesting farmers cut back but we need to look at it. Maybe we don’t need that insurance amount.”

Care is needed when comparing yield figures, as different measures can lead to the wrong conclusions.

For example, is it gross-harvested yield or marketable yield, and what about dry matter?

David Firman says yields should ideally be expressed across the harvested area, but sometimes it can be across the planted area, which may differ.

This is one of the reasons for the discrepancy between AHDB and Defra yield figures.

Then you need to consider how yields are being measured. Are they based on crop sampling, box counts or trailers going over a weighbridge? There are now harvesters with yield monitors which may give a different figure again.