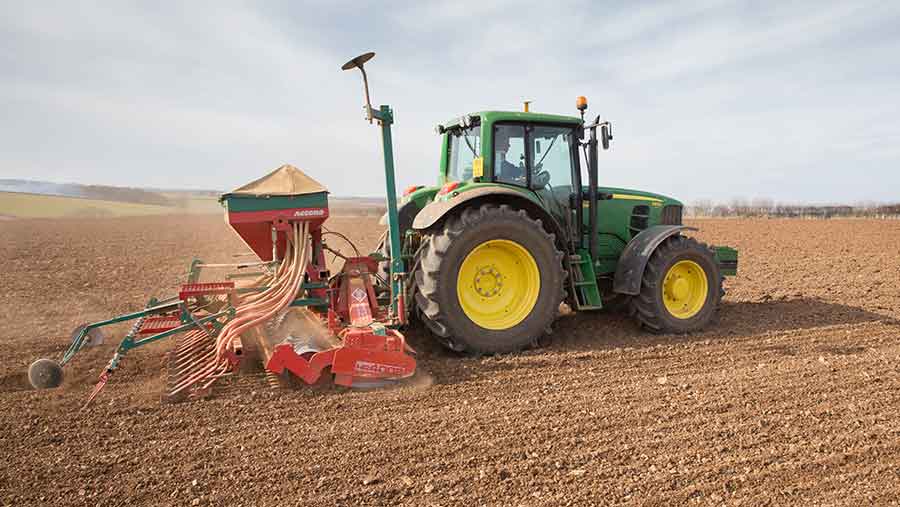 Demand for spring barley seed is more than double that of last season, according to one leading seed supplier, which says it is now sold out of the nation’s top two varieties.

Seed for most combinable spring-sown crops is being snapped up quickly by growers ahead of an expected big swing to spring cropping, says seed and agronomy group Agrii.

Paul Taylor, head of crop marketing at the company, says the group has seen strong demand for spring barley seed, up 146% on this time last year, but there is also a big uptick in seed orders for crops such as peas, beans and linseed.

“Demand for all spring crops is up, other than spring oilseed rape seed, halfway through the selling season,” he tells Farmers Weekly.

The two most popular spring barleys – the malting varieties Propino and Planet – are sold out at a price of £390/t from Agrii’s contracted UK production, but these two could be available at an imported price of £440-450/t.

Mr Taylor suggests growers may have to move to other malting varieties such as Laureate, while another possible malting variety, Irina, is in short supply.

“Our advice would be to book your seed as soon as possible,” he says.

The AHDB Early Bird survey last November forecast a 17% rise in spring barley planting to almost 800,000ha this year, coming after a previous annual rise of 10%, with a lot of the area becoming available due to the fall in winter oilseed rape plantings.

Mr Taylor believes many growers continued to drill winter wheat after the survey was undertaken in a generally mild and dry autumn, and so predicts a spring barley crop this year of just 600,000ha.

Agrii, one of the two leading seed suppliers along with Frontier, offers contracts for three varieties in England – Propino, Planet and Irina – and three in Scotland – Concerto, Laureate and Chronicle.

Agrii is contracting 9,000ha of Explorer with the aim of producing 65,000t to satisfy all the needs of the group’s two UK breweries.

Demand for spring oilseed rape seed has been light as the crop is often drilled later than spring cereals and many growers are cautious about the crop because of low yields and problems with achieving good pest control.

Seed demand for naked oats is also higher, but the annual market is small at 30,000t for uses such as gluten-free pet food and high-quality horse feed.