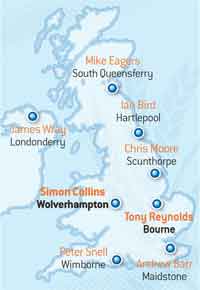 For Tony Reynolds, whose initial wheat combining in Lincolnshire was halted by rain on Tuesday, this season has thrown a particularly pleasant surprise.

The variety and pigeons’ reluctance to land among the stems both contributed to the result, he believed. “Alienor clearly suits our land.”

NK Bravour and Castille sown conventionally even later and completed on Monday gave no more than 3.7t/ha, he estimated.

His main concern was for 100ha of the crop on land he farms near Melton Mowbray. “It’s getting worryingly late.”

After suffering damage from the recommended herbicide, WintaLin winter linseed, as expected, performed poorly. “We had 30 acres and got 16t. The missed strip looked marvellous, but it’s unlikely to be a crop we’ll have again.”

Late on Tuesday afternoon he embarked on a new true no-till venture – Autocasting Alienor plus Luxan Red 5 (metaldehyde) slug pellets behind the Claas Lexion 460. This was stripping 20ha of second-crop Timber wheat at 14.7% moisture.

“We did about 9 acres before we were rained off.”

Calibrating the seed and pellet application rates from the split Autocast hopper seemed straightforward, but determining what was actually taking place was somewhat harder, he said.

“It was difficult to know what was happening because there’s a lot of mulch on the surface from the previous wheat – I frightened myself as I couldn’t find any seed or even see any soil.”

Even though the machine “placed” rather than “spread”, Mr Reynolds (conscious of the Get Pelletwise campaign) said he intended to substitute Sluggo (ferric phosphate) pellets for the metaldehyde on headlands beside any ditches.

Following the Timber, he hoped to be soon into his first wheats, Alchemy, Duxford and Humber and eventually some spring beans sown to replace some failed oilseed rape.

“My worry is that we’re going to have a lot ready at the same time.”

“Frustrating” was how Simon Collins described harvest up to Tuesday on the land he manages on the outskirts of Wolverhampton.

“It’s not as bad as last year yet – but it’s getting a bit like it,” he said. When he joined former manager Andrew Blenkiron last harvest there was still plenty uncut by September, he recalled.

About 41ha of mid-October sown Saffron and Carat winter barley grown for feed had averaged only 7t/ha.

“We had a small field along the canal bank that went in in poor conditions even later. It was ravaged by rabbits which took the average down. With hindsight perhaps we shouldn’t have drilled it.”

Harvest student Dan Hutchings had kept up well drying through the farm’s Opico mobiles – one 9t/hour the other 15t/hour -with grain moisture off the New Holland CX8060 24ft cut combine ranging from 19% to 16.8%.

Mr Collins had planned to sow Samson and Delilah stubble turnips at 2kg/ha after the barley for lamb finishing; but the weather was thwarting the task’s completion after 30ha had been drilled and rolled. 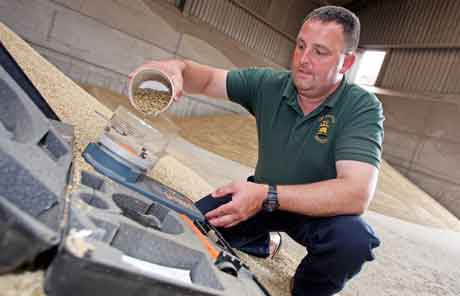 “The straw’s wet in the swath after heavy rain on Saturday, but it will be baled and carted as soon as possible.”

His winter oilseed rape, 40ha – all Castille – was bound to be late cut.

High winds and heavy showers almost every day for a fortnight meant it was desiccated only last week, he explained. “So far it’s OK, but I know some up in Shropshire is starting to shed.”

Bad weather had also halted progress on cutting his final 20ha of hay/haylage. But some under Countryside Stewardship, was in arable reversion/hay-strewn meadows that had cutting date constraints anyway, he noted.

The barley, sold to Wrekin Grain for harvest movement because of limited storage space, had made just £82.50/t. That made his earlier decision, to sell 200t of feed wheat forward for November delivery at £122/t, look particularly rewarding.

Like Mr Reynolds he also feared for his potentially telescoping workload.