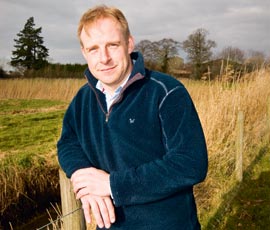 Once the combines moved into crops on our north-east Norfolk and Perthshire Barometer farms, progress was rapid and results were better than expected. David Jones and Luke Casswell report

Kit Papworth (pictured above) started and finished his harvest in August for the first time in living memory with results turning out much better than he had hoped for back in the spring.

A record area of 260ha of oilseed rape was also all drilled in August and all had established well on his light Norfolk soils after some recent rain.

“The oilseed rape is up and away and looking good. The establishment was very good and the rainfall very good for the crop,” he says.

The rapeseed harvest turned in an average 4t/ha yield over 220ha, which Mr Papworth says was “very good” considering some crops suffered from poor establishment and pigeon damage in a difficult season.

His winter wheat was also variable with the best crops, including early-drilled Revelation making just under 11t/ha, and even February-drilled Cougar 9t/ha, but others suffered from variable rainfall.

Around half his 550ha of winter wheat is grown for seed on his land in north-east Norfolk, and he has already made his variety choices for the coming season after growing 28 different varieties last season.

For the future he likes Evolution and Kielder, sees Santiago as a good banker, while Revelation, Cougar and Invicta will be part of his variety choices going forward.

He is particularly pleased with his spring cereals, which he says work well after late-lifted sugar beet and is encouraged to look towards increasing the area in the future.

“Spring wheat and spring barley performed well after late-lifted beet and we are very pleased with the crop this year,” he says.

For this season, he will be growing about 300ha of spring barley and pushed up his spring wheat area.

Winter barley grown largely for seed was cut first, and the variety Harlequin ended up yielding around 10t/ha and Joy 8t/ha, making for a good start to harvest.

The big disappointment was winter rye, which did not yield well due a lack of moisture and damage from rabbits on some of his lightest soils. 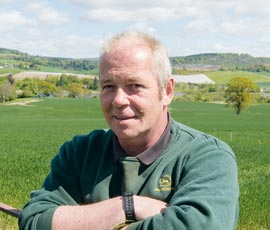 Harvest finished in early September on Andrew Stirrat’s farm in Perthshire following one of the driest summers he can remember.

“We dried all our wheat in four days – we’ve never dried everything so quickly, it’s been incredible,” says Mr Stirrat.

In a normal year, wheat would be harvested at around 18% moisture on his Fingask farm, however this year has been very different.

“It’s been coming in at about 15% moisture. I can’t remember a harvest like it. Five years ago it was dry but moistures were never this low,” he says.

Last year he was struggling to see many dry days but this year there has been no dew and he has been combining at 8.15am.

Mr Stirrat rounded off his harvest on 2 September and is well under way with next year’s crops.

“All our oilseed rape is in the ground and we were actually drilling it before we had cut this year’s crop, which shows the huge contrast in years.” he says.

Despite the dry weather making for an easy harvest, overall yields have been slightly down for Mr Stirrat, who blames the wet weather through the autumn and winter as well as dry weather in June and July.

“We haven’t really had any significant rain all summer so the wheats were dying off rather than ripening off,” he says.

Wheat yields have ranged from a very low 1.25t/ha in some patches up to 11.25t/ha, and Mr Stirrat says the farm average will be around 7.5t/ha.

“The first field we did was Horatio and this was the best field by far, but it was drilled about three weeks before anything else,” he says.

“The wheat is not as good as we thought but how it has survived it is amazing really,” he adds.

Mr Stirrat will start drilling the winter wheat variety Clarie this week into land that was left fallow last year.

“We fallowed it to sort the drains out and we’ve deep subsoiled it every two feet, then hauled a press over it so it should be a good seedbed.”