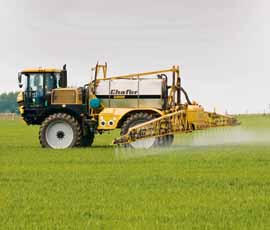 Last season, Bayer’s Aviator Xpro (bixafen+prothioconazole) cost about £35/litre. However, at the recommended use rate of 1.25 litre/ha, Adexar weighs in at £42.50/ha, compared with Aviator at £35/ha.

“We recommend a rate of 1.25 litre/hectare to extract maximum value from the product,” explained Peter Hughes, BASF UK fungicide product manager, at a growers’ meeting in Peterborough. “With an additional outlay of £5-10/ha, growers could increase output by between £50-100/ha. It makes sound business sense to use Adexar,” said Mr Hughes.

Approved on all cereal crops, Adexar is particularly active when controlling Septoria tritici and rusts in wheat. It also offered good control in barley diseases, equal to the other leading barley fungicides, said Mr Hughes.

“Trials have shown there is more root activity lower down in the soil profile, which could have significant benefits in drought years.

“Although the old chemistry does control disease, it is not giving the same yield responses and the subsequent added value to crops,” said Mr Clark.

The flexibility of the product was its major selling point, said Patrick Stephenson, independent agronomist in Yorkshire.

“The product fits all situations, as it performs well on Septoria tritici and rusts and therefore wouldn’t require the addition of a strobilurin,” said Mr Stephenson. “It really is ‘one product fits all’ when assessing whether to use Adexar.”

Despite its advantages, other SDHI fungicides performed well last year, so growers and advisers might be reluctant to change for the coming season, said Mr Stephenson.

“You don’t just jump out of bed when things are going well,” he added.

Adexar is available this spring in 10-litre containers.