Mixed farmer Colin Chappell says sharing data and knowledge with other farmers is helping him gain confidence in his business decisions and prepare for a post-subsidy world.

“The process allows you to analyse every single figure that comes through your farm,” explains Mr Chappell.

“If you can’t measure it, you can’t manage it. It allows you to manage your resources on your farm, and I think it’s invaluable.”

Learning from other farmers

Mr Chappell shares his data with eight other arable growers within a benchmarking group, allowing them to compare their results and learn from each other.

His data is also shared anonymously with every other farmer using Farmbench, helping to create the data set that everyone uses.
Through the group he has picked up useful tips from other farmers.

“It could be just that little nugget of information that allows you to structure your business slightly differently,” he said.

“You are trying to look at those figures and ask; ‘how’s he managed to grow that crop so cheaply? What’s he done differently? Why is his management structure so much different to mine?’.

“Knowledge exchange is much more important than looking over your neighbour’s hedge and thinking they have a worse blackgrass problem than me.

“I’ve got to the point of where I now think I’ve got a worse black grass problem than the guy next door – so what have they done differently? What little tweak have they made? Can they give me a bit of advice?”

“We should become more open with what we’re doing and why we’re doing it. We can learn much more as a united team than we can as our individuals.” 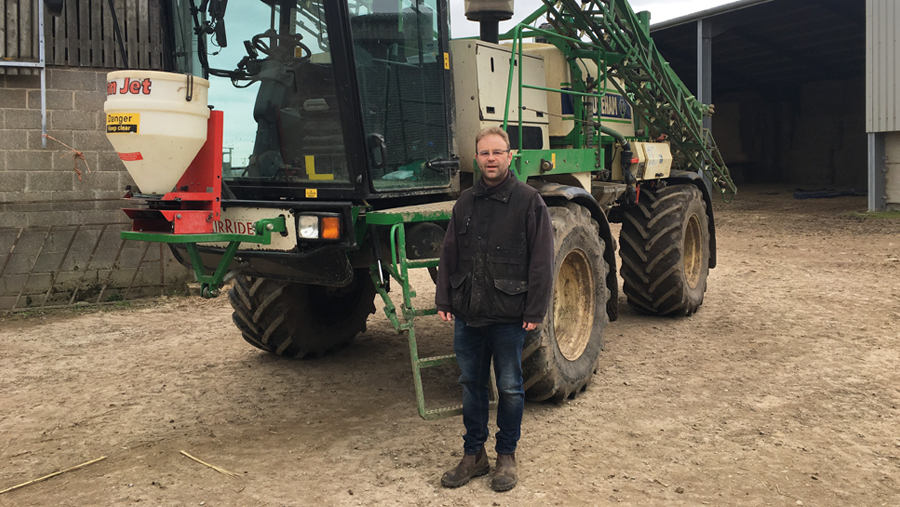 “Michael Gove has effectively given us a 10-year period to restructure our business and Farmbench allows you to do this going forward,” says Mr Chappell.

His business stands to lose 50% of its income, but being able to monitor his costs and bounce ideas around with other farmers is helping him prepare.

“Farmbench allows you to look at different scenarios. For example, if you take a subsidy figure out can you structure your business to survive?”

Mr Chappell is using Farmbench and AHDB’s support to analyse whether it makes financial sense to continue his suckler herd if a post-Brexit trade deal opens the gates to cheaper imports.

“I want to know if all the 2am emergencies in thunderstorms and snowstorms are worthwhile,” he says.

Knowing his figures has also enabled him to make a better decision about whether or not to take on a 300-acre tenancy, says Mr Chappell.

“It’s given me the confidence to prove to people around me that taking on that tenancy was the right thing to do for me.”

He also has a clearer handle on his labour and machinery costs and understands better how to talk about depreciation with his accountant.

“Benchmarking gives me the confidence to know if I can get through a year like this where yields have halved.

If I make tweaks here and there, can I manage with half my income in 10 years’ time when, hopefully, I pass the farm on to my son and daughter?

“You can’t just sit on your hands and bury your head in the sand, and get through it.”

Is it easy to get started?

Finding and inputting data can be daunting to start with, says Mr Chappell. But he was able to ask his accountant for help and AHDB’s

Farmbench team, who are available on the end of the phone.

“When things become hard, that’s the point you really ought to be picking up the phone to these guys,” he says.

“They can look into the data you’re inputting and give you pointers on what to change.

“On my farm, how do you apportion water between cows and the sprayer, for example?

I don’t know. I don’t have these answers. That’s where you take the advice from people that are more knowledgeable than yourself.

“AHDB will get back to you within the day – and you can get a figure to input into your data.”

The first year needs a bit of time and effort to set up, but it’s worth it and it becomes quick and easy thereafter, says Mr Chappell.

He estimates he spends half a day a year on entering data to Farmbench.

“It gives me such valuable information, it’s just part of what I do now. It’s just a natural process.”

Sharing his farm’s data is anonymous and private between him and AHDB, or other farmers in his group.

“The only person that’s really going to know where your data comes from is that person you phone at AHDB to say you’re struggling with a fixed cost and to ask for some help,” he says.

Is is worth it?

“The benefits of the final figures outweigh any short-term pain in inputting the data,” says Mr Chappell.

“What you get out is so much more valuable than the time, effort and stress to get it all together.

“I think it is absolutely critical that every single farmer in this country has some form of farm benchmarking – it has given me the confidence in what I’m doing.

“And Farmbench is one hell of a management tool – I think it’s an invaluable tool that more of us should be using.” says Mr Chappell.