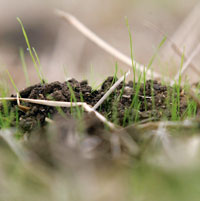 Emergence in fields is high because very little blackgrass emerged prior to drilling, but subsequent warm weather seems to have broken suspected high dormancy, she explains.

“We haven’t actually looked at the factors that break dormancy, but tests with seeds with different dormancy planted in containers have come up quicker this year than in the three years we’ve been doing the project.” Warm soil temperatures have also contributed to faster emergence.

The sudden flush, combined with some concerns over the level of control from pre-emergence herbicides, means post-emergence applications will be important. “Be prepared to spray sooner and not wait for the spring,” she advises.

Emergence mainly happened in crops drilled into moisture in early October, Prime Agriculture’s Graham Brooks says. “Those fields with a history have got blackgrass coming up to one leaf, but there is still little blackgrass to find in earlier fields drilled into the dry.

“It probably means estimates of Atlantis use pre-Christmas have increased slightly, maybe to 10-15% of fields, but it is still a case of whether they get to a suitable size to spray before the weather closes in.”