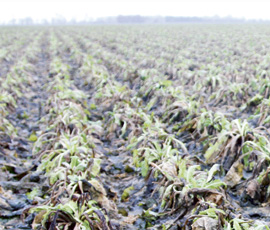 British Sugar has agreed to open factories earlier this autumn in a bid to avoid a repeat of this season’s disastrous crop losses.

The move follows widespread criticism by growers that later opening of factories last autumn left crops at the mercy of severe winter weather.

Although later opening gave beet longer to “bulk up” with sugar, crops were then hit by the coldest December for 100 years.

Problems were compounded by mild weather in January. Beet turned to mush, rotting in the fields across eastern England.

Rather than opening for beet processing in October, this autumn factories would open from mid-September onwards.

Big losses from this year’s beet harvest will be confirmed in a trading statement issued by British Sugar’s parent company ABF on Monday (28 February).

“It has been a difficult and painful campaign for all parties involved,” admitted Gino de Jaegher, British Sugar’s UK managing director.

“We have never experienced such severe weather so early.”

Mr de Jaegher said he recognised the current season had been painful for growers, fieldsman, contractors and British Sugar employees.

“People have started crying or had tears in their eyes when they have seen what has happened to their crops,” he said.

“I completely understand how it feels. I have lifted something stronger than a glass of water over the past couple of nights myself.”

Additional processing aids, including filtration, had enabled British Sugar to process as much beet as possible from the field.

Despite heavy losses, the company had been able to process beet that just a few years ago would have been rejected outright.

The company closed its Newark factory in mid-February. The Wissington factory closed late on Wednesday (23 February).

It was likely that the Cantley and Bury St Edmunds factories would both remain open until early March.