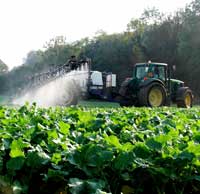 European ministers have finally adopted rules which threaten to reduce crop yields and increase the cost of food.

The Council of Ministers voted to adopt the Pesticide Authorisation Regulation on Thursday (24 September).

It switches the approval of pesticides from the risk-based approach to the use of hazard-based “cut-off” criteria.

Experts have warned that the new rules will reduce crop yields and quality and increase the cost of food to consumers.

The Crop Protection Association said some 15-20% of approved crop protection products would be lost as a result.

“It is scandalous that this legislation has been passed at a time of mounting concern over food security,” said CPA chief executive Dominic Dyer.

“But this will not be the last time an agricultural technology faces new legislative proposals, and there are clear lessons to be learned for the future.”

The entire UK food chain had spoken out against the new rules, said Mr Dyer.

But the vote went through, despite opposition from the UK government and a coalition of MEPs.