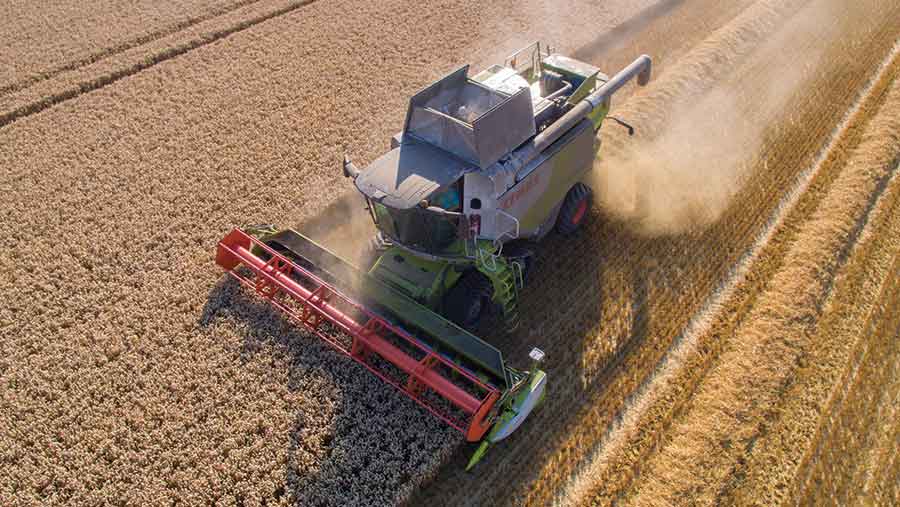 Cooler weather in June and July had a more noticeable affect on crops north of The Wash, creating a north-south divide, with northern crops generally outperforming those further south.

Tim Lamyman, farming high on the Lincolnshire Wolds, achieved the highest yield in the Adas Yield Enhancement Network (YEN) competition with a yield of 16.50t/ha, but there were other top yielding crops from Scotland, Ireland and Denmark.

Daniel Kindred, senior research scientist at Adas, says this year’s entries saw a number of wheat yields over 15t/ha, whereas the previous highest yield in the three-year old competition was 14.5t/ha.

“Yields were helped by bright weather especially in March, April and June and relatively cool conditions in June and July,” he told an awards presentation on Wednesday (11 November).

Overall grain yields rose to 12.8t/ha from last season’s 11.8t/ha, while calculated potential yields were virtually unchanged at about 21t/ha, which helped to close the perceived “yield gap”.

He calculated that the extra sunshine over the five-month March-July period boosted yield by 0.71t/ha compared with long-term yield averages, and gave an extra 0.35t/ha over 2014’s yields.

The exceptionally bright March and April together with low rainfall encouraged crops to develop deep root to access more water and so survive the short sharp heatwave in early July, he adds.

The generally cooler weather played a part to give a longer growing season, give less water loss through respiration, more efficient use of water and light, and greater floret survival and grain set.

These lower summer temperature were more marked from Lincolnshire northwards, helping to push up northern yields due to a longer grain-filling period.

Roger Sylvester-Bradley, head of crop performance at Adas, reported YEN entries numbered 69 in 2015, virtually double last year’s 35, with 56 from England, five from Denmark, four from Scotland, two from Wales and one apiece from Ireland and the Netherlands.

The range of yields was from 9.6t/ha to 16.5t/ha with the highest yields coming from those crops with the higher biomass – grain and straw – with average crop biomass in 2015 rising sharply by 3t/ha to 21.5t/ha compared with 2014.

Mr Lamyman’s crop broke the five-year old world wheat yield held by Mike Solari’s crop of 15.64t/ha in New Zealand, while later this summer Northumberland grower Rod Smith achieved a yield of 16.52t/ha, although he did not enter the YEN competition.

Award winners for the YEN competition in 2015 – field entries

Award winners for the YEN competition in 2015 – plot entries

Adas launched its YEN competition in 2013 in an effort to break through the yield barrier facing growers, with the hope it would drive innovation and encourage growers to get close to their maximum potential yield. For more information, go to www.yen.adas.co.uk