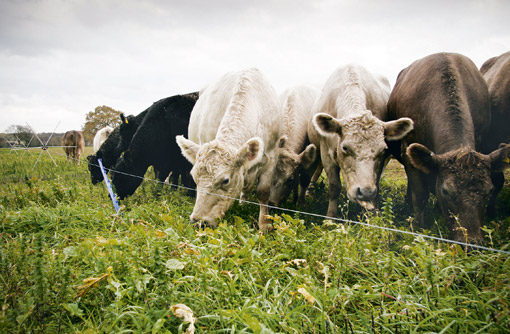 Paul Billings, agricultural director for British Seed Houses, says any land where a re-seed is planned for the autumn still has the ability to be far more productive in terms of dry matter yield if it’s taken out and sown with a catch crop.

“My advice is to take out grass now rather than wait until the autumn and get the benefit from a catch crop in late summer.”

Hybrid brassicas can be sown now and be ready for grazing within eight or nine weeks producing four to five tonnes of dry matter an acre at a time of the year when “tired” swards are inefficient.

“It’s the most efficient way of using the land and not allowing a worn-out ley to limit the amount of dry matter it will produce,” says Mr Billings.

“Dairy farmers may decide they’d rather keep their milking cows on grass, but this crop is ideal for youngstock or dry cows. It provides much needed dry matter and added flexibility instead of having to suffer the shortcomings of an old sward,” he adds.

Kale sown by the end of June is another forage option ready for feeding by October/November – but brassicas can also be used to fill-in the autumn gap so that kale can be used later in the winter.

“There are good opportunities for producing extra tonnes of forage dry matter to fill the October to Christmas gap using hybrid brassicas. When these crops aren’t being used as a catch-crop prior to a reseeding with grass in the autumn, they can be late-summer grazed and then allowed to regrow to provide more forage in late autumn until Christmas,” adds Mr Billings.

Cattle and sheep producers who faced fodder shortages last winter are being encouraged to look ahead to next winter’s feed requirements and consider mid-summer sowings of catch crops such as kale.

At a sowing cost of about £17/ha, forage crops are capable of good yields of dry matter compared with late summer grass – but advisers say cropping decisions need to be made quickly.

Farmers who haven’t grown forage crops should “work backwards” from the time they need them, advises Rachel Wynn of Cotswold Seeds.

“If you want stubble turnips you should be sowing crops 10-12 weeks before you need them; this crop will give you 4.5t of dry matter and be available to feed until January,” she says.

“Kale is still an option at this stage of the summer. It’s the highest yielding winter brassica and needs 20 weeks to fully mature. It’s winter hardy and will provide a high protein forage through till March at up to 9kg/ha of DM.”

Dairy farmer John Cottle of Sealand, Flintshire, grows about seven hectares of fodder beet as an essential part of his winter feed. He achieves a yield of 40 to 45t/acre and cows strip graze the beet to give daily intakes of about 20kg freshweight.

“We sow the crop in April so we can start feeding in September through until March. It’s a very straightforward crop to grow, but you have to be careful to select clean varieties that don’t carry too much soil on the roots. It’s a very good forage for improving for milk quality,” says Mr Cottle.