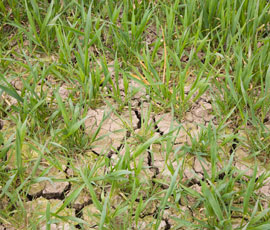 Arable farmers selling grain forward have been urged not to over-commit on contracted tonnage for this harvest.

The driest spring on record in some parts of the UK has prompted fears that yields could be reduced and this must be taken into account when committing grain forward through grain pools or physical contracts, NFU chief arable adviser Guy Gagen said.

Lessons should be learned from last year when there was a similar dry spell during the spring and summer, which had an effect on yields, he said.

“Marketing crops forward in a period of volatility can undoubtedly be a good way to help mitigate risk from downward price movements. With 2011 forward prices much higher than anticipated, many arable farmers have already secured tonnage for the 2011 harvest that enable them to improve chances of locking in a profit.

“However, when a deal has been done to secure prices, it is important not to over-commit crop, particularly in a rising market.

Grain traders advise that when a shortfall against committed or contracted tonnage is anticipated, discussing options as early as possible makes it easier to work out a mutually acceptable deal between the parties.

“Waiting until movement to discuss a shortfall on tonnage all too often results in the kind of solution that our members are very unhappy with,” Mr Gagen said.

There have already been a number of reports of slow and patchy emergence of spring crops and signs of water stress developing for oilseed rape and some cereal crops, he noted.