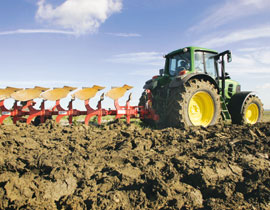 Growers are urged to use caution when considering cultivation methods ahead of spring drilling, with heavy soils remaining wet at plough depth.

As the dry spell continues and the sun shines, spring planting has been gathering momentum, particularly on lighter land.

However, heavier ground has only dried superficially, remaining plastic beneath the surface and prone to smearing and compaction when cultivating at depth.

Yorkshire independent agronomist Patrick Stephenson fears bringing up “horses’ heads” with the plough, which will be difficult to work into a fine, well-consolidated seed-bed.

“Spring drilling is on top of my priority list, but patience and passing lightly should be the approach for preparing the heavier land,” says Mr Stephenson.

In the south, Agrii advisor Iain Richards is sharing the same concerns, particularly ahead of spring barley establishment, which has increased in importance this year in his area, with plantings up.

“Spring barley returns will be more crucial than ever and with malting premiums low, maximising yields will be our number one priority,” he notes.

He believes patience can also be practiced for another three to four weeks before delayed spring barley drilling will start to result in a yield penalty.

He is taking a two-stage cultivation approach, with an initial pass to open the soil and allow further drying, followed by a second pass to the desired depth for drilling once dry enough.

“We will also be rolling where we can, waiting three to four days for the surface to dry to ensure we aren’t just kneading lumps,” says Mr Richards.

Good seed-to-soil contact is essential to give the crop the best possible start and also maintains the defences against the ever-present slug population that still threatens crops.

Growers should also resist the temptation to sow spring barley too deep while attempting to avoid the threat of rook grazing, as soil temperatures remain low, at around 2C.

“We will also be upping seed-rates from now on, from the current 350-375 seeds/sq m to 400+, which should compensate for poor tillering,” adds Mr Richards.

The legacy of the wet 2012 continues to show itself in the form of the autumn herbicide programmes left in tatters. Despite soils beginning to dry, they are still not warm enough for Atlantis (iodosulfuron +mesosulfuron) applications.

Growers are chomping at the bit to get these blackgrass control measures moving, but they must wait for warmer soils and active crop and weed growth.

Frontier agronomist Brian Ross is sees his winter barley crops as the most challenging at present, with just one product currently recommended for use – Axial (pinoxaden).

“This will work in slightly cooler conditions than Atlantis, and the smaller the blackgrass, the better chance of having some effect on the weed.

“Meadow grass is unsolvable if it has not been hit with a residual already,” says Mr Ross.

Also in winter barley, Avon agronomist Stephen Harrison is starting to see first signs of key diseases Rhynchosporium and net blotch, which will require treatment with a fungicide based on cyprodinil ahead of the normal timing.

“Those crops on lighter land are also starting to show signs of nitrogen deficiency, with soil nitrogen supplies failing to cope with the crops’ demands,” he points out.

Oilseed rape crops have remained a topic of debate – to keep or not to keep – and pigeons are now tipping some crops over the edge.

Mr Harrison believes that the latest onslaught from these troublesome birds will be the final straw for his smallest, most backward rapes.

“Canopies are shrinking rather than expanding and I fear for them. I foresee very little rape needing a growth-regulating triazole this year,” he explains.

Despite some crops not having the ability to withstand the grazing, Mr Ross reminds us that oilseed rape has remarkable powers of recovery when weather improves and fertiliser is taken up.

“I have some of my more forward crops decimated back to nothing but stalks, but that is not uncommon and they usually come back,” he says.