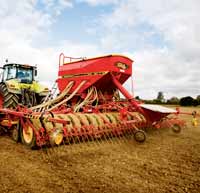 Crop plots at Cereals form the technical heart of the event, helping to bring the key arable issues of the day alive. Louise Impey kicks off our tour with a look at some notable Recommended List and candidate varieties that are catching expert’s attention

There’s a surge of good varieties coming through the system, but with each season bringing surprises, the real winners are never confirmed until harvest is well under way, says Simon Kightley, NIAB’s oilseeds expert.

“For winter oilseed rape, 2009 will be a proving year,” he says. “We’re waiting to see if the new hybrids will snatch market share from some established favourites, and if some very promising candidates will have as good a third year in trials as their figures to date predict.”

Hybrids have now claimed the top two places on the HGCA Recommended List for the east and west region, he points out.

“That’s good to see. There’s a daylight gap between PR46W21 and Dimension and the best performing conventional type, Vision.”

That said, Vision will tempt growers, believes Mr Kightley. “It combines good disease resistance and standing ability with a 3% gross output advantage over Castille, and it’s shorter than the hybrids.”


In the north, he picks out Cuillin and Emerson for their light leaf spot resistance and Catana for its high yield. “But remember that there aren’t many trials sites behind the data and it seems as though we won’t get a clearer picture this year.”

Of the candidates, DK Cabernet stands out at this stage, reports Mr Kightley. “It’s a conventional variety with very high gross output, together with good disease resistance and standing power. It’s hard to fault.”

But other promising varieties have failed at the final hurdle before, so he advises caution. “We’re hoping for confirmation of its performance – it could be as much as 4% higher yielding than PR46W21 and 9% above Castille.”

Another variety waiting in the wings is Krypton, which leads the northern candidates and also shows good performance in the south, he adds.

“But both Krypton and DK Cabernet are medium-tall in height. They’re not the low biomass model that growers have liked in Castille, so they will have to be prepared to change their approach.”

Many of the other candidates need to have a good year to be recommended this autumn, he believes. “Currently, they’re equivalent to existing choices.”

Dave Robinson of The Arable Group advises growers to consider what’s important to their production of the crop.

“Forget about yield. Do you need early spring vigour? Do you have to drill a bit later? Are pigeons a big problem?”

If the answers mean that vigour and early growth are key requirements, then he advises going down the hybrid route. If the ability to home-save seed is important, then conventional varieties are the only choice.

“Of the hybrids, look at either PR46W21 or Excalibur, both have done well in our trials. Otherwise, it’s between Vision and Castille in the conventional category. Vision looks very good and Castille has been very consistent.”

In the north, Mr Robinson still favours Excalibur, but he also highlights Cuillin for its disease resistance. Catana is his pick of the conventional varieties.

He is also impressed by candidate DK Cabernet, which he believes should make the Recommended List this autumn.


Interest in the semi-dwarf oilseed rapes hinges on whether farmers are prepared to offset yield performance in favour of their manageability, suggests Mr Kightley.

“The only candidate semi dwarf, PR45D05, yields less in the south,” he says. “But in the north, it sits in the middle of the pack. So we’ll have to see how it does this year.”

The latest additions to the Group 1 and the Group 3 categories, Gallant and Scout, are likely to attract more interest from growers at Cereals than the candidates, believes Clare Leaman of NIAB.

“They’re both good additions in groups which needed alternative choices,” she says. “Growers should look at them.”

To succeed, Gallant needs support from the millers, she accepts. “You need to know who you’re going to sell it to. We’ll have more information after harvest on its market appeal.”

None of the Group 1 varieties are perfect from an agronomic view and Gallant doesn’t change that situation, she notes.

Scout, the new Group 3 variety, offers advantages over Robigus and has come at a good time, advises Mrs Leaman. “It has no weaknesses and its grain quality is very good.”

In the Group 2 sector, she highlights Panorama and Ketchum as of interest to Einstein growers for their better yield and disease resistance. “But Cordiale growers won’t be tempted, as they don’t offer the same quality.”

Of the feed wheats, Oakley will remain a contender, she believes. “JB Diego and Duxford both have a place, offering high yields and very good second wheat performance, while Viscount is the top-yielding of the soft milling feed varieties.”

Her final mention is Grafton. “It has good yields, short stiff straw and early maturity, so fits the requirements of many farms.”

The candidates have a tough task ahead, she believes. “It’s not clear whether any of them are a step forward. Sterling is the highest yielding of the potential bread making types, but it’s at the Panorama level. Other possible bread makers include Kingdom, Horizon and Quartz.

“The picture is the same with the potential Group 3s.”

TAG’s Dave Robinson points out that the biofuels market is creating demand for feed wheat in the north, prompting many growers to look closely at the Group 4 varieties, all of which have been declared suitable by the energy companies.

“And two of the Group 4s are at a crossroads,” he says. “Oakley, which has some useful characteristics, has stumbled on yellow rust this year. It’s been a problem in the variety as far north as Newcastle.

“And Viscount is another one with an uncertain future. It may fit well for export and bioethanol, but its export potential could be limited by its bushel weight.”

Alternative Group 4s include Duxford, JB Diego and Grafton, he suggests. “Grafton is suitable for the high lodging risk sites and it has very useful earliness.”

Otherwise, new Group 1 Gallant looks good on paper, he notes. “It’s early, which is needed in a bread-making variety. But growers don’t know if the millers are going tolike it.”

Mr Robinson likes the disease resistance offered by biscuit type Scout. “It’s an interesting Group 3 and could be suited to second cereal situations.”

Of the candidates, he picks out just two. “Quartz should have a future if it makes the Group 1 specification. And Invicta is a potential biscuit maker with good disease ratings and OWBM resistance.”

Cassia is the winter barley candidate highlighted by both Clare Leaman and Dave Robinson as having the combination of yield and grain quality.

“It’s a two-row feed variety with a good bushel weight and yields towards the Retriever level,” summarises Mr Robinson.

He adds that although Retriever and Saffron are the highest-yielding existing feed choices, Carat is the variety favoured by growers. “It’s short, stiff and early. Growers have stuck with it.”

Popularity of the winter malting types is dictated by the end user, notes Mrs Leaman. “The decision on Wintmalt is due any day now. Both of the candidates, Purdey and Winsome, look to have some promise. But it all depends on their malting tests.”

Volume joins the six row hybrids this year. “They’re very early, which is useful, but growers are in the hands of the breeder with these types,” says Mr Robinson.