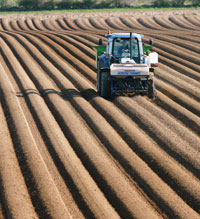 Alternative pest and disease control solutions for potatoes will be found at Cereals for the first time this year as the crop makes its debut. Louise Impey finds out more

Natural control methods for various soil-borne pests and diseases have had a place in potato production for a number of years and are increasingly finding favour with growers, says Andy Barker, research and development manager at Branston.

“Many of these environmentally-friendly biocontrol methods are suitable for use in integrated pest management strategies, where they complement the activity of conventional control techniques,” he says. “Others have proved to be very effective when used alone.”

Branston, the first potato supplier to be exhibiting at Cereals, will be demonstrating three examples of such methods in plots and displays, including biological slug control, trap cropping and biofumigant crop blends.

Nemaslug Xtra, a natural slug killer, is a good example of a natural solution which works well with other methods, says Dr Barker.

“This product contains a slug-specific nematode, which seeks out soil-dwelling slugs,” he explains. “Just one nematode invading a slug’s dorsal pore is sufficient to do the job.”

One difference between Nemaslug Xtra and slug pellets is that the biocontrol penetrates the soil profile, targeting the slugs where some species prefer to occupy, he adds.

“Nemaslug is also more persistent than surface-applied pellets, lasting for up to four weeks or more.

“Obviously the slugs must be in the soil profile for it to work. That’s why the best time to apply it is just before haulm burn-down, when there’s no top cover and the slugs are moving down into the soil.

“Pellets work well when there is surface activity. So we have found that the best results come from both methods being used, at the appropriate time for their mode of action.”

A Nemaslug rain gun applicator will be unveiled at Cereals. “The product has to be applied when it’s raining, to get the nematodes into the soil. With this applicator, it can be put into the water going through a rain gun, just as it can already be used with drip and boom irrigation systems.”

Branston’s trap crop Foil-sis, which offers sustainable control of potato cyst nematode (PCN) has shown to give a 60-85% reduction in PCN numbers in mineral soils when used alone.

The crop, Solanum sisymbriifolium, is planted in May when soils reach 12°C. It triggers hatch in the soil, but the pest is unable to complete its life cycle, explains Dr Barker.

“It has its peak effect on nematodes six to eight weeks after sowing, but can be left in the soil for longer than this. It’s blight resistant, is non-tuber forming and doesn’t have to be destroyed.”

New varieties for trap cropping are being evaluated all the time, with the hope that cold-tolerant strains may allow the crop to be sown in late summer, he says.

Three biofumigant crop blends are also featured in plots – two of which are currently available to growers, CureGro and FumiGro, and one which is still being assessed.

Used to suppress weeds and pathogens by manipulating the natural defence mechanism found in some plants, they have other benefits which gives them a place in integrated control strategies, suggests Dr Barker.

“As well as their effect on pythium, sclerotinia, fusarium, rhizoctonia and phytophthora species, they also have green-manuring benefits and can act as a trap for nitrogen.”

Planted after a cereal crop and grown for a period of at least six weeks, the biofumigant crop then has to be incorporated with a minimum 10-day gap before sowing the subsequent crop, he advises.

“We haven’t seen any evidence yet that our biofumigants offer PCN control,” he stresses. “But we are looking at the potential of the right combination of species for doing this.”