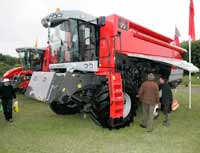 Big kit fans will be able to see the farming industry’s latest and finest machinery at Cereals 2010.

Both dealers and manufacturers say the latest line-up of working kit in the demonstrations will be the ideal place to compare and contrast machinery.

The event, which is being held at Robert Law’s farm, near Royston, Hertfordshire, promises to be bigger and better than ever for power-seekers.

There will be 10ha of working machinery demonstrations and a line-up of 52 trailed, mounted and self-propelled sprayers from over 23 manufacturers, in Syngenta’s Sprays and Sprayers Arena.

Visitors can compare power, productivity and performance of many makes and models of machinery including tractors, cultivators, drills and sub-soilers.

A number of exhibitors will also be demonstrating GPS and vehicle guidance systems.

Claas will give its UK debut to some of its best new tractors, including the new 524hp Xerion 5000.

The Xerion 5000 tractor and the smaller 483hp Xerion 4500 proved popular at November’s Agritechnica Show, and were named Machine of the Year in the big machine category. Both tractors will be commercially available in the autumn.

Joining the Xerion tractors, will be the new small Avero 240 combine, the latest hybrid Tucano 480 and the 12-metre wide version of the Vario cutterbar for the Lexion 600.

The new Massey Ferguson 9280 Delta “hybrid” combine will make its UK debut at Cereals and will go on sale for the 2011 season.

Adam Sherriff of Massey Ferguson, says: “We are confident this combine will put us in the capacity stakes where it matters for large scale producers.”

For sugar beet harvesting, Grimme has launched a new £130,000 six-row trailed machine, the Rootster 604, as a viable alternative to a self-propelled machine on farms with a small to medium sugar beet acreage.

Described as “powerful and versatile” by MF, both tractors are powered by the latest 7.4 litre capacity Agco Sisu power engine, which is renowned for its “excellent economy” and for producing high pulling power at low speeds.

Two new ranges of Fendt tractors will debut at Cereals. The new 819 to 828 Vario models, with powers from 200hp to 280hp, popular in the 200hp+ sector offering additional features and controls.

Meanwhile, New Holland’s “stop at nothing to keep the customer moving” top service privilege and service plus after-sales product range will be a core focus of their exhibition.

Simba will be launching 4.5m and 6.0m wide FlatLiner models this year, with a 4.5m model due to be shown for the first time at Cereals.

Also, Simba’s ProntoEX – 3m mounted drill launched at LAMMA 2010 – will be on show at Cereals for the first time.

There will be several new features and upgrades on Vaderstad’s Rapid, Spirit and Seed Hawk drill range and the TopDown and Carrier cultivators.

And Opico will display a full range of applicators for precision placement of fertiliser – from the Ferticast unit for granular fertiliser to the Nitrojet skid unit for liquid N, which can be mounted onto any make of cultivator.

*For information about exhibitors, tickets, what to see and how to get there, visit the Cereals website at www.cerealsevent.co.uk.