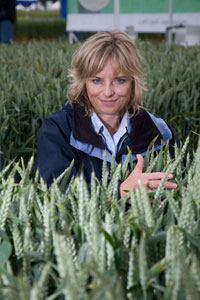 The first was better disease control. In 13 independent trials where Septoria tritici pressure was high, a full dose of BAYF869Xpro, which is based on bixafen and prothioconazole, gave around 15% better septoria control on average on the top three leaves, she said.

In barley, a 60% dose of BAYF385Xpro improved the rhynchosporium control of a full dose of Fandango by 11%, net blotch by 16%, and set new standards for ramularia suppression, she claimed.

The second factor was the fungicides’ extra persistence. In those same 13 trials in wheat, the new fungicide gave an extra three weeks’ activity against septoria from a T2 spray, and similar extra persistence against rhynchosporium in barley.

That didn’t mean growers would be able to drop a spray, Dr Daniels said. “But it does mean where there are delays or there is a large area to spray, growers can have a real buffer. It also means at T3 you can base your choice of fungicide on fusarium, microdochium and sooty moulds rather than a hybrid of those and a foliar disease top-up spray.”

The new wheat fungicide would be targeted as a flag leaf spray, rather than a T1 spray, she added. “There are other choices and disease targets at T1.”

The fungicides’ ability to maintain green leaf for longer also contributed to higher yields. “In Bayer trials there was around 30% more green leaf area when assessed just before harvest compared with the standards. It is a oil of Olay effect for crops.”

But there was no problem with delayed ripening of grain, she stressed.

The end result was a fungicide that had added on average in trials an extra 0.6t/ha in wheat, and 0.25t/ha in barley, she said.

Part of the reason behind the impressive performance was in the product’s formulation, she said. “It uses a triple-adjuvant formulation system called leafshield, which means the product gives superb crop coverage, regardless of water volume, nozzle type and forward speed.”

It also helped with resistance management, she claimed. “The active ingredients move at the same speed through the leaf, so the disease gets a double hit from the carboxamide and the azole. The end result is an in-can resistance management strategy which I think is the best we’ve ever had.”

Bayer is confident of the new fungicides being on sale next spring.