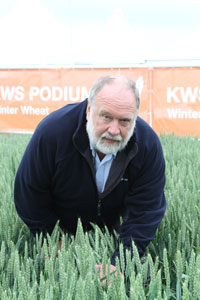 Growers looking for out and out yield could soon be replacing their Oakley area with a new candidate variety, according to its breeder.

“It is 2% higher yielding at 108% of controls and has a score of 7 for yellow rust – there is nothing in the pipeline that is likely to beat it in the next few years.”

It could suffer from yellow rust, he admitted, and it would require a robust fungicide programme, but it offered greater resistance than Oakley. “It is also likely to coincide with the release of new fungicide chemistry, which should help protect it.”

Autumn growth was slow, but it was a prolific tillerer which would help with blackgrass competition, he said. “It should be suited to mid-September drilling, but we need to get a bit more data.”

It was slightly taller than Oakley so it would require a plant growth regulator programme, he said. “A small amount of C1 seed will be around this year, but the C2 launch will take place next year.”