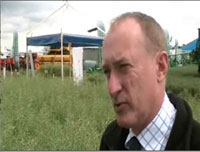 Oilseed rape seed treatments might give plants the ability to tolerate turnip yellows virus, but not necessarily control it, plots on the Velcourt stand at Cereals 2010 suggested.

Plots treated with seed treatments, including Modesto and Cruiser, were infected with virus carrying Myzus persicae aphids. Both were said to have an effect on the aphids, said Keith Norman, Velcourt technical director.

That backs up findings from sampling on Velcourt farms across the country this season, which found high levels of infection despite crops being treated with either Modesto or Cruiser, and in some cases, also having foliar insecticides applied later in the autumn.

“In the autumn, on average 30% of the aphids tested were carrying virus, while up to 78% of the leaf samples were infected. More tests in the spring confirmed high infection levels, including one farm in Kent where 92% of leaves tested in April were infected,” Mr Norman said. “It is hugely worrying.”

But Modesto and Cruiser treated plots at Cereals 2010 were more vigorous than the non-insecticidal seed treatment plot. “The crop appears to have kept growing, so maybe the seed treatments increase tolerance to the virus.”

Seed treatments had a role to play in the control of turnip yellows virus, Broom’s Barn’s Mark Stevens said. “But they are not designed to control primary infections. The aphid has to feed on a plant to take up the chemical, so when an infected aphid feeds it passes on the infection. What they do is stop secondary infections.”

But that meant where infected aphid numbers were very high seed treatments could be swamped, he acknowledged.

Where infection levels were higher than 85% control was often poor with Modesto, Bayer CropScience’s Adrian Cottey admitted. But where pressure was lower both Modesto and Cruiser OSR could provide 50-75% control. “The data suggests where there is moderate infection you get a good result.”

Research was continuing to help understand the virus better, Dr Stevens said. This season plots had been inoculated with turnip yellows virus at monthly intervals to determine whether infection date influenced yield loss.

“We know that it does with beet mild yellows virus, when you get a 25% yield penalty from infection in May, which decreases over time, but do we get the same with TuYV?”