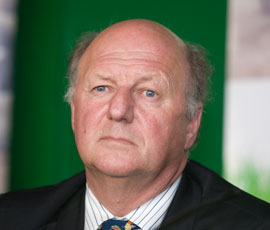 Speaking during a Q&A session at Cereals 2012, Mr Paice said the media had taken a “more balanced view” towards the planned attack on the GM wheat trial at Rothamsted Research on 27 May.

“It was a very different view to the issues that they (the media) would have taken 10 or 15 years ago,” said Mr Paice.

“I think that demonstrates that public opinion is beginning to take a more balanced view towards where GM fits into the whole technology sphere.”

“GM has a role to play. It’s not the panacea to all our problems – it isn’t going to produce all our food.”
Jim Paice

However, Mr Paice said he did not believe that the time was right for the government to launch a campaign in favour of GM technology because “if government tells you it’s good, everybody assumes the reverse”.

A lot more work needed to be done, not just by farmers and producers, or the chemical and plant breeding companies, but also by scientists generally, including food scientists, to communicate the full facts to the public, he added.

“GM has a role to play. It’s not the panacea to all our problems – it isn’t going to produce all our food,” said Mr Paice.

“But it has a role to play, as long as it’s applied safely and all the necessary tests on each modification are properly carried out. There’s a long way to go, but I do believe the famous tanker is beginning to turn.”

But Mr Paice said he was “not comfortable” with the amount of knowledge transfer being delivered from research work to the field.

“I can assure you that it’s an area we are working extremely hard on. I do believe the AHDB has a role to play in the knowledge transfer field as well.”