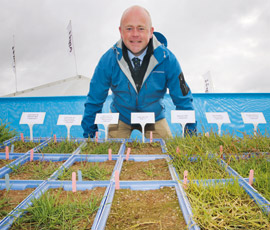 After a difficult autumn for cereal establishment in 2012, growers are urged not to make a knee-jerk reaction by drilling too early.

That is the advice from Bayer’s combinable herbicides campaign manager Chris Cooksley, whose demonstration at Cereals showed the pitfalls of too much reliance on chemistry.

Comparing herbicide programmes on different grassweeds, the value of using a sequenced approach is clear to see, he said.

Where a pre-emergence was not used, blackgrass planted in demonstration trays was still abundant and healthy, having only received a post-emergence spray of either Atlantis or Unite.

“In perfect conditions you can still get good control of most grassweeds, but you must use a pre-emergence application followed by a well timed post-emergence when the target is small,” he explained.

Blackgrass control poses one of the biggest challenges that growers face, with herbicide resistance widespread across the UK.

The demonstration also showed the control achieved on other major grassweeds such as annual meadow grass, ryegrass and brome is not guaranteed.

“You can no longer rely on post-emergence applications to get you out of trouble, which was the case this season when many pre-emergence sprays were missed because of catchy conditions,” said Mr Cooksley.

The active ingredient flufenacet remains the key herbicide in programmes for controlling grassweeds and growers are urged to make the most of it.

Used in products like Liberator or Crystal it is growers’ last robust chemical option in the battle against blackgrass, with only a marginal drop in efficacy since its introduction.

Mr Cooksley urges growers not to mess with rates of the flufenacet formulations and also use other products, such as Lexus and Defy, to ensure maximum control.

It will be difficult for many to hold their nerve and delay drilling this coming autumn, with memories of fields left undrilled until the spring.

“A field will always have to be planted last and where you have a high weed burden, consider leaving it until later in the autumn to get as much out of cultural controls,” he added.

Mr Cooksley advises ploughing where the seed burden is high, but conversely opt for as little soil disturbance as possible in clean fields to avoid bringing up viable seeds in the next crop.

“Choose appropriate seed rates to compete with the weeds and seedbeds should be as fine as possible to get the most out of the chemistry that is most effective – at pre-emergence,” he said

The post-emergence grassweed herbicide stalwart Atlantis has been on the slide and in the future its active ingredients iodosulfuron and mesosulfuron are going to have to be teamed with another active to bolster activity on troublesome weeds such as blackgrass.

“With no other new actives on the way, we are going to bolster what we have with another ALS inhibitor which will make it a more rounded product,” said Mr Cooksley.

However, he was quick to point out that it will not “get you out of a hole” if rampant herbicide resistance is present on your farm.

“It will be stronger on bromes and give a boost to wild oat and ryegrass control, but will still need to be used in programmes with other actives, such as Liberator at pre-emergence,” he concluded.