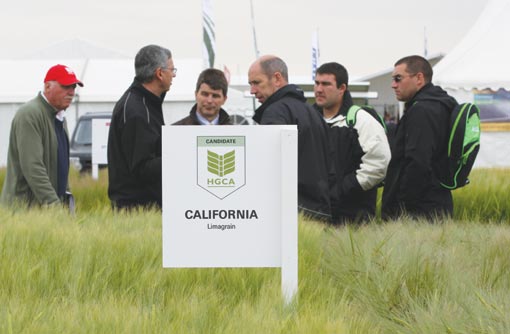 One of the main reasons Cereals has become so popular is the rich diversity of its crop plots. Hundreds have again been established this year to help explain the latest agronomic developments – a very practical initiative that has become a hallmark of the event.

Researchers, agronomists and technical specialists will be available in many of the plots for both days of the event, giving visitors an unrivalled opportunity to update their technical expertise.

Yield may be king, but increased output has been hard to come by on farms in recent years. At Cereals, several exhibitors are looking at innovative ways to boost yields.

In trials, wheat yields are increasing by about 1t/ha per decade, but farm yields plateaued 10-15 years ago, notes Bill Clark, technical director at NIAB TAG.

“Wheat yield is strongly governed by rainfall and sunshine during grain filling, both of which had a major effect in 2012,” he comments. “But decisions on agronomic inputs, variety choice, crop management and cultivations can also have a large effect.”

NIAB TAG is demonstrating the research, breeding and agronomy advances that will help farmers get closer to achieving the genetic potential of their wheat crops. Eight different wheat types will show both the components and restrictions of yield, quality and agronomy.

Velcourt is examining “genetic light harvesting” for wheat, which demonstrates (non-GM) work carried out at the John Innes Centre to introduce a wild wheat trait that re-arranges the leaf wax when introduced to commercial lines. The resulting plants absorb more light.

“In field trials we have seen a 5% yield increase,” says Velcourt’s technical director Keith Norman. “If that continues we could soon see commercial uptake.”

Velcourt is also growing some of the latest hybrid wheats that show clear yield benefits over conventional types.

Rothamsted Research/BBSRC/John Innes Centre will demonstrate wheat adaptation to climate change, using different wheats from around the world, and show how science will help develop better varieties for expected changes in UK climate over the next 20-50 years.

New outlets for rapeseed oil could help boost on-farm profits. Velcourt is trialling a new mutant oilseed rape type that shows great promise as a hydraulic oil. Its high oleic acid content means the oil copes with temperature and pressure extremely well, says Mr Norman. “The value of this market is huge – the rapeseed could attract some very good premiums.”

HGCA is investing in research that could see rapeseed oil used in a wide range of new applications, not only hydraulic fluids but also engine oils. The European lubricants market amounts to 4.5m tonnes per year.

The performance of fungicides, particularly the latest SDHI products that proved so valuable last year, comes under scrutiny at Cereals.

Velcourt is assessing crop protection programmes in wheat, using established and new chemistry, which is sure to provide a host of valuable take-home messages for visitors.

On the Syngenta stand, growers will hear the merits of a preventive rather than curative approach to disease control in winter wheat and barley, using the company’s long-lasting isopyrazam-based fungicides.

Bayer CropSciences’ fungicide plots will showcase the SDHI + azole treatment Aviator Xpro in winter wheat, which has proved effective over two very different seasons in commercial use. Fandango- (fluoxastrobin + prothioconazole) and Siltra Xpro- (bixafen + prothioconazole) treated plots will provide the backdrop for discussions over the best programmes for winter and spring barley.

In addition, HGCA is focusing on improving control of two topical diseases. Work to improve mycotoxin management includes investigating the underlying causes of fusarium disease infection and the production of better models to improve the prediction of mycotoxin production. Combating ramularia through an approach combining varietal resistance, healthy seed and optimised fungicide applications is also being aired.

With growing concern over pyrethroid resistance in grain aphids, the effectiveness of the cereal seed treatment Redigo Deter against barley yellow dwarf virus will be the centre-piece of Bayer’s seed treatment demonstration.

Rothamsted Research will demonstrate the benefits of oilseed and brassica margins to on-farm biodiversity and how they can contribute to biocontrol in other crops, namely wheat.

AICC is using Cereals 2013 to review the practice and implications of stubble burning to help control resistant blackgrass and other pests and diseases.

“Our aim is to open up the debate around the possibility of bringing back burning, whether under licence after proven need or the option of controlled back burning,” says chief executive Sarah Cowlrick.

Two winter wheat and two oilseed rape plots were sown with resistant blackgrass and subsequently treated with post-emergence herbicides. The effects of burning will be demonstrated on one plot of each crop.

Bayer’s herbicide team will be taking a first look at new pre- and post-emergence herbicides in the company pipeline that are aimed at key grass and broad-leaved weeds.

Winter wheat and barley growers expecting blackgrass challenges this autumn will be able to learn more about pre-emergence herbicide stacking on the Syngenta stand.

The HGCA is examining ways to maintain high levels of blackgrass control, including combining alternative chemistry to ALS inhibitors with cultural options, such as delayed drilling, varying seed rates and weed suppressing varieties.

The importance of a rotational approach to tackling weeds in combinable crops will be a key feature of the Dow AgroSciences stand. “With many weeds, particularly blackgrass, becoming increasingly resistant to herbicides the challenge of weed control demands a broader approach than herbicides,” says Stuart Jackson, weed control expert at Dow AgroSciences.

The approach will address seven key points including cultivations, varieties and rotation.

Keeping soils in good health is especially pertinent after the effects of last year’s deluge throughout autumn cultivations. NIAB TAG’s The Hole Story will demonstrate the importance of maintaining a healthy soil and how farmers can influence soil structure to ensure optimum yields.

Rothamsted Research is highlighting the importance of interaction between soils and roots, and the importance of soil microbiology. Sophisticated digital soil water samplers and new work on nitrogen leaching will also be demonstrated.

Plant establishment is under the microscope on the Limagrain stand. Visitors will be able to look at the effect of thousand grain weight (TGW) on seed size and optimum plant population, an important issue given the increasingly lengthy autumn drilling windows that many arable businesses face.

“The effect on plant populations and overall establishment will be up for discussion,” says Michael Fletcher of Limagrain. “The plots will clearly illustrate the importance of sowing by seed number rather than weight.”

The British Beet Research Organisation is demonstrating beet growing and management throughout the season, from cultivations through to storage. The aim is to promote the 4X4 yield initiative to lift individual grower yields by 4% in each of the four years from 2012-15 to help prepare for the new sugar regime.

“There will be technical stations to talk growers through best practice and technology,” says spokesman Paul Bee.