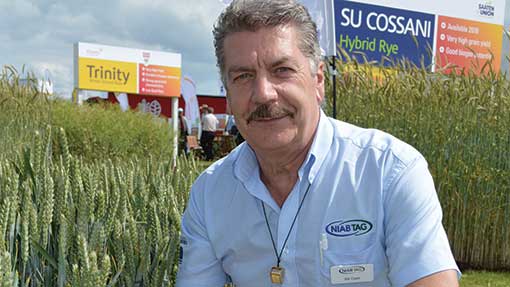 Five fungicide sprays could become the norm to fight off yellow rust and septoria and also cope with the fall in efficacy of the key azole fungicides.

“Look at varietal resistance. It is the most important factor and could save growers a small fortune,” he tells Farmers Weekly.

Mr Clark suggests growers look to newer wheat varieties, such as Evolution, with good levels of disease resistance rather than older more susceptible ones.

The variety which is the equal top yielding winter wheat on the HGCA Recommended List has a resistance score of 9 for both yellow and brown rust and a 6 for septoria.

Mr Clark’s early warning of the worst yellow rust year ever came true for many growers, especially for those in the East due to a mild winter, many susceptible varieties being grown and a new Warrior race of the disease.

“The days when you could get 10-14 days eradicant activity are long gone. Even full doses of epoxiconazole or prothioconazole are only giving about 30% control in eradicant situations – so half doses are even less effective.”
Bill Clark, Niab commercial technical director

In the East, azole seed treatments or autumn sprays followed by pre-T0 sprays kept the disease in check, but those who’s T0s or T1s were late found the disease a challenge to control.

He says fungicide resistance is not an issue against this disease as there are azoles, SDHIs and strobilurins all active against yellow rust.

Low doses of azoles will still work well on yellow rust, but he emphasises that this is not the case with the wet weather disease septoria, which is more prevalent in the North and West.

This disease has proved very difficult to control in these areas of the UK even when pretty robust fungicide programmes have been applied, and may need an extra spray such as a T1.5.

This disease problem was partly a consequence of the season with leaf two tips showing at GS32 while leaf three was nearly fully emerged, and then forward crops slowed down leaving leaf two tips exposed to disease.

Where the gap between T1 and T1.5 sprays was greater than 10 days then the tips of leaf two were infected for too long by the time the T1.5 spray was applied.

In these cases, half doses of the azole epoxiconazole at this T1.5 stage did not have enough eradicant activity to cure leaf two infections, Mr Clark says.

A “normal” T2 SDHI-azole product was then not sufficient to eradicate infection on leaf two.

This “poor” control is a consequence of the loss of eradicant activity from the azoles – such as prothioconazole and epoxiconazole – due to resistance development, he says.

Mr Clark believes that many growers and advisers have not grasped the nettle of loss of efficacy – particularly eradicant activity – of the azoles.

“The days when you could get 10-14 days eradicant activity are long gone. Even full doses of epoxiconazole or prothioconazole are only giving about 30% control in eradicant situations – so half doses are even less effective,” he says.

Mr Clarke adds growers need to monitor leaf emergence closely, as with the tips of leaf two showing at GS32 then a T1.5 spray may need to be applied earlier than some people imagine.

“Ten to 14 days after T1 is probably too late even if it’s a T1.5 spray,” he says, suggesting eradicant activity of the azoles only last about seven to eight days.

Mr Clark also highlights the importance of using the multi-site protectant product chlorothalonil with the T1 spray so some of the fungicide gets on to leaf three and the emerging leaf two.

If SDHIs are used at the maximum rate of twice in a season at T1 and T2, then Mr Clarke suggests a T1.5 should be an azole-chlorothalonil mix.

In fact, he believes chlorothalonil has a key role to play at T0, T1 and T1.5 to give protection of emerging leaves.

Even with grain prices sliding recently it should have little impact on current fungicide advice.

“Wheat has to come down to £60/t before it would influence fungicide treatments,” he says.