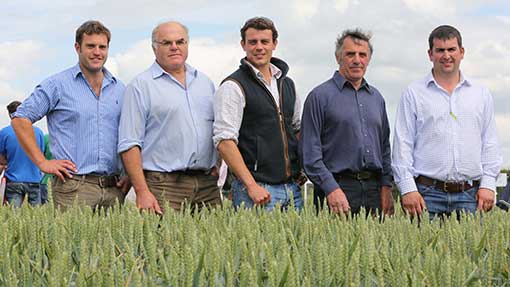 Using manures and taking a zero tolerance approach to blackgrass are some of the approaches being taken by this year’s Nabim finalists, vying to be the UK’s top milling wheat farmer.

The three Milling Wheat Challenge finalists were revealed at the Cereals Event, with Nabim trade policy manager Martin Savage, adding that all were examples of farmers achieving high standards.

Bob Chapman and his son Robert have adopted spring cropping in an attempt to get on top of a blackgrass problem at South Lodge Farm near Peterborough.

This season the family has 182ha (450 acres) of winter wheat (Solstice and Crusoe) plus 65ha (160 acres) of Mulika spring milling wheat.

“Last year, we grew Mulika for the first time as we had to redrill some crop and saw its potential, so we increased the area.” They are also looking at other spring crop options to help tackle their resistant blackgrass problem.

Rick Davies, and his father Mike, have taken a more extreme approach to blackgrass, as they switch from the plough to the Claydon single pass approach.

Their rotation is wheat – wheat – oilseed rape and wheats include Solstice, Gallant and Crusoe.

Mr Davies has gone down the Claydon route with all oilseed rape drilled with this approach and he is starting to do same with wheat.

Blackgrass has been rogued by hand over the past three years and they no longer need to use Atlantis (iodosulfuron + mesosulfuron), he says. “This year it took six people six days to cover the 100 acres and was about the same cost as Atlantis with no seed return.

“We did spray one field off this year, which sounds drastic, but is necessary as we have to take a no tolerance approach. Fields have to be clean for the Claydon.”

The third finalist is well known in the pedigree Simmental showing world, winning awards with his Stirling Simmental herd.

And Joseph Edwards is looking to repeat this success with the milling wheat challenge. He grows 300ha of milling wheat comprising 100ha of Gallant, 50ha of Crusoe for Warburtons, 70ha of Cordiale in the second position and 30ha Solstice with the rest being feed wheat.

He farms heavy land near Cheltenham in a high input system and achieves premiums to make it pay. To achieve the protein spec, milling wheat receives 280kg/ha of fertiliser and he also uses organic manure – poultry litter or manure from his pedigree herd, on the proceeding oilseed rape crop.

Judging is taking place later this month by the judges Nabim’s Martin Savage, HGCA head of regional development Richard Laverick and Lincolnshire arable farmer Mark Ireland and the winner will be revealed this autumn.