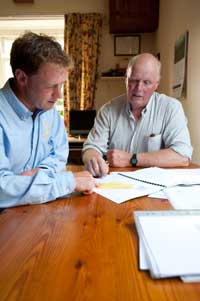 Training meetings are being set up to help prepare up to 1500 farm advisers for their role in delivering the aims of the Campaign for the Farmed Environment.

The campaign will encourage farmers to retain the environmental benefits of set-aside voluntarily, and avoid regulatory measures being introduced.

Three key targets have been set: Doubling the area of in-field entry level stewardship options; retaining the current level of uncropped land, and increase the area of voluntary environmental management on farm.

These targets should ensure the benefits of set-aside in protecting natural resources, farmland birds and farm wildlife are maintained.

Two initial adviser meetings have been organised for late November to brief leading advisers from the Association of Independent Crop Consultants, the Agricultural Industries Confederation and the Central Association of Agricultural Valuers about the campaign’s aims, the NFU‘s Andrea Graham says.

“These events are primarily aimed at training the trainers and will help us understand the needs of advisers, who will be working with and advising farmers on how to participate in the campaign.”

The aim is to use that information to build a training package for all advisers, Jim Egan of the Farming and Wildlife Advisory Group explains.

The package will be tailored to provide key advice for different types of advisers, from agronomists to land agents, he says. “Agronomists will have different needs to land agents, who are mostly filling in SP5 forms, and FWAG advisers helping with ELS applications, for example.

“But the key is that they all receive the same messages about the campaign’s objectives. We don’t want conflicting advice coming from different advisers.”

General training for advisers is likely to start in December and continue into the New Year, when the letters to farmers start arriving with information about renewing Entry Level Stewardship schemes entered into in 2005 next August.

Many agronomists provide advice on ELS applications, Andrew Watson, AICC chairman notes. “In August there will be around 6000 schemes due for renewal, most of which included management plans as one of the options. That’s no longer allowed, so it will be important to get agronomists up to date with the campaign aims, and make sure they know what the key options that farmers should consider if they renew.”

In addition, they will be advising growers on voluntary measures that could be put in place, and have to be aware of the target for non-cropped land, he says.

“The key thing is the advice has to be farm specific. That’s why there are lots of options in ELS, but it has to be a business decision that benefits both the farm and the environment. Of course, that’s what advisers are set up to do anyway.”

The campaign is both a huge challenge and opportunity for the whole farming industry, Mr Egan stresses. “We have the opportunity to show the industry is responsible and that farm land can be managed with both production and the environment in mind.

“The key message is the campaign needs everyone to understand its importance, and everybody, both farmers and advisers, needs to make it work. Everyone needs to take part.”