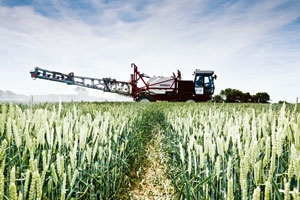 Will the dry conditions and the use of new chemistry at T2 make a difference to ear spray strategies this year, asks Louise Impey?

Foliar disease top-up, specific brown rust protection or control of fusarium to reduce mycotoxins, a traditional T3 application had to cover them all.

And while there were three triazole fungicides to choose from – metconazole, tebuconazole or prothioconazole – none of them were a perfect fit for all three roles, says Jonathan Blake, senior research scientist with ADAS.

“As a result, whichever was the main target of the ear spray affected the choice of T3 fungicide,” he says.

This year, however, things could be different, he says. The arrival of two new SDHI fungicides, with their greater persistency when used at T2, changes the requirements of the T3 spray.

“Where an SDHI has been applied, the foliar disease top-up won’t be required in the same way, as that cover will already be in place,” notes Mr Blake. “It gives growers an opportunity to approach the T3 spray differently and perhaps re-consider product choice. There could be scope for savings.”

James Taylor-Alford of Bayer CropScience agrees with Mr Blake’s view on disease control. “If Aviator has been applied at T2, the threat from septoria and brown rust has been dealt with for the rest of the season. The exception, especially this year, is yellow rust, which may still need an active spray at T3.”

But removing two of the potential disease problems allows growers to focus on getting the timing and dose right for fusarium control, rather than reducing costs or saving sprays, he believes.

“It means there’s no need to compromise on timing, which was always an issue for a combined foliar top up and fusarium spray. All too often, the ear spray went on too late to get good fusarium control and mycotoxin reduction.”

For fusarium, spray timing is absolutely critical, he notes. “The first two to three days of flowering, or GS61-63, is the time to spray. It’s a very tight window – if you’re later than that, infection will have already taken place.”

A three-quarters rate of a fusarium-active azole, such as prothioconazole, will be required, regardless of the T2 fungicide choice, he advises.

“If you’re not worried about fusarium, then you can reduce this to half rate. Either strategy will take care of any yellow rust as well.”

Tebuconazole could be an alternative T3 choice, he accepts. “It does offer fusarium activity but it’s not as strong as prothioconazole. So you have to consider the risk to crops.”

Bill Clark, director of Broom’s Barn, echoes the timing advice. “You have to spray at early to mid flowering with the appropriate rate if fusarium is your target. If it isn’t, there’s the chance to be more objective with your T3.”

This advice only applies where the T2 spray did include either Aviator or Seguris, Mr Clark stresses. “If your T2 was predominantly triazole-based, then it won’t have the legs to keep septoria and rusts at bay for the rest of the growing season.

“In this situation, you will have to make a decision about your main target and time the spray accordingly.”

Warm, dry springs favour most fusarium species and inoculum will continue to develop down in crop debris while such conditions prevail, says Philip Jennings of FERA.

However, moisture is needed by Fusarium graminearum – one of the mycotoxin producing species – in mid to late May for the pathogen to complete its life cycle, he says.

“It produces wind-borne ascospores from perithecia, which have to become wet to release the spores,” he explains. “Those parts of the country that have had rain could have a problem with it. But where it’s remained dry, the threat will be reduced.”

The other main mycotoxin-producing species, Fusarium culmorum, is less dependent on rain in May, adds Dr Jennings. “It spreads by splash-borne microconidia, so rain at flowering time dictates whether it can infect the ear or not.”

But if the weather stays dry into June, there won’t be any need to target fusarium at T3, he says. “But be aware that the disease doesn’t need the amount of rain that was first believed. Sometimes a heavy dew is all that it takes, especially where Fusarium graminearum is concerned.”