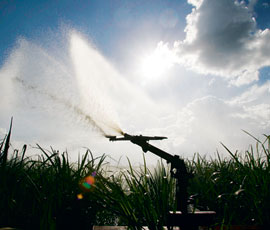 Climate change will offer agriculture in the UK both opportunities and threats, a new report says.

However, the balance of beneficially warmer conditions against the negative effects of limitations in water and nutrient availability will likely determine how the industry fares this century.

Above all, water availability will be essential for agriculture going forward – but it could also be a limiting factor concerning potential increases in productivity resulting from warmer temperatures.

The findings were published in DEFRA‘s Climate Change Risk Assessment (CCRA) report, which highlights the challenges the UK faces over projected changes to our climate.

The report was launched by DEFRA on Wednesday (25 January) along with a National Adaptation Programme (NAP), which must be assessed every five years to address the most pressing climate change risks.

Both are being introduced following recommendations in the Climate Change Act 2008.

Speaking at the launch, DEFRA secretary Caroline Spelman said: “We’re providing a new farm advice service on adaptation because we know that there is a demand for it in the industry.

“Farmers are very receptive to the need for us to work together to make sure they are sustainable in the future.”

Although many farmers were still coping with drought conditions, including the last two springs – two of the driest springs on record in England – the report highlights that by the 2080s, the risk of flooding of agricultural land from rivers and the sea could “increase significantly”.

Prof Watson noted several areas that agriculture needed to tackle to adapt to the challenges of climate change.

“We need to do more research to get crops that are more drought and pest resistant, and temperature and salinity tolerant – ones that are also more nitrogen efficient so farms use less nitrogen fertiliser.”

More research was needed into soil science as “a priority”, as well as work to produce better crop traits and analyse which crops could be “potentially viable in different parts of the UK”.

For example, warmer conditions would be more favourable to the cultivation of less common crops such as blueberries and miscanthus and new crops not grown in this country.