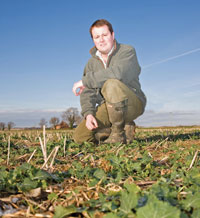 Up to 20% of crops could be at risk from pigeons or the effects of the cold snap in North Yorkshire, Durham and Northumberland, Frontier‘s Andrew Roy suggested on Tuesday (6 January).

“We have a little snow cover in places, so it is hard to tell exactly [what the effects of the cold have been], but on one very backward field I walked yesterday, the frost lift was so severe it had lifted the crop out on to its back with the roots pointing up.”

Conventional varieties appeared to be more affected by frost lift than hybrids, he added.

Patrick Stephenson, an independent agronomist from the area, agreed the prolonged cold spell wasn’t good news for October-drilled crops. “Anything sown by the beginning of October has made a crop, albeit small and backward. Anything after that date doesn’t look good right now.”

Late-September sowings should survive the cold spell, he thought. “But from a pigeon point of view (see below) they make a tasty hors d’oeuvre, and there isn’t much stem for them to grow on from in the spring.”

That meant that while crops would recover from pigeon damage, there would be a big impact on yields in affected crops, he said. “Half our remaining crops could be at risk.”

In the Scottish Borders and Lothians about 20% of crops were also at risk, Andrew Gilchrist of Scottish Agronomy feared. “The cold weather is definitely not good news. There will definitely be some lost crops.”

But that probably wouldn’t become apparent until the end of the month, he said. “There is no great emphasis to plough crops up at the moment – it is worth giving them the benefit of doubt until then.”

David Colville – a grower in Perthshire and part of Farmers Weekly’s Sigma oilseed rape team – said his crops seemed to be coping well, helped by being drilled in August. “They are backward for the time of year – we would normally expect them to be clearing the ground by 6in rather than the 3in they are currently. But they should be strong enough to survive the cold, unlike some other crops around us.”

In Lincolnshire, Ben Atkinson was also confident that his later-drilled crops would cope with cold weather. While those crops were physically smaller than he would have wished, he said his sub-soiling based establishment technique had allowed them to put down decent roots.

Phil Smith, growing 400ha of oilseed rape in Aberdeenshire, was equally content with his crops. “We’ve got 80% ground cover, and the general health seems to be fine.”

Switching pigeon-scaring tactics regularly was important, Mr Stephenson said. “As most growers will tell you, pigeons very quickly become familiar with your system of scaring, so change what you are doing at relatively frequent intervals.”

Don’t get bored with doing it either, he stressed. “You’ve got to keep at it. All too often growers lose enthusiasm just at the critical point.”

Large flocks of pigeons were starting to congregate, Mr Roy said. “There is a big pigeon threat, although there are plenty [of other food sources] for them to go at on stubbles and uncropped land. If we had been 90-100% cropped they might have been an even bigger problem, but for the moment they are more dispersed.”