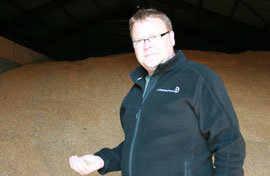 Visitors to Cereals 2011 seeking to avoid grain rejections thanks to warm post-harvest weather can gain advice and view live store monitoring demonstrations on the Monitor and Manage stand at this year’s event.

The firms Richard Johnston said: “Last year was a good example of just how challenging grain cooling can be when warm weather in the critical weeks after harvest caused widespread problems.”

Last September saw temperatures rise above the national average, with a number of particularly warm days that Mr Johnston recalled often gave a timeframe of only hours during any 24 hour period to cool grain.

He said that failure to cool grain quickly enough has put stores at risk of insect and mite infestations as well as fungus and mycotoxin development. “It’s an issue that in some cases has only recently come to light as spring temperatures have soared and with them, pest infestations,” he noted.

And with grain prices now so high, losses from grain rejections could mount into thousands of pounds. “It’s difficult to source accurate data, but typical rejections due to crop quality – rather than failing to meet specification criteria – is around 0.05%. That’s equivalent to two loads from a 1,000 tonne store that would cost an average £1,000 per load in penalties and cleaning charges.”

Pointing to recommendations set out in the HGCA Storage Guide Richard says that the first target is to cool the grain to below 15C within a fortnight. “This will prevent saw-toothed grain beetles developing, and where temperatures can then be brought down to below 12C as quickly as possible, all insect breeding can be prevented. “And it can be surprising how quickly this can be achieved. We have seen temperatures – see graph – drop to 12C and then 5C using only 10s of hours of high pressure fans running, and that largely comes down to picking the right hours via real time crop and store monitoring, combined with excellent control algorithms. 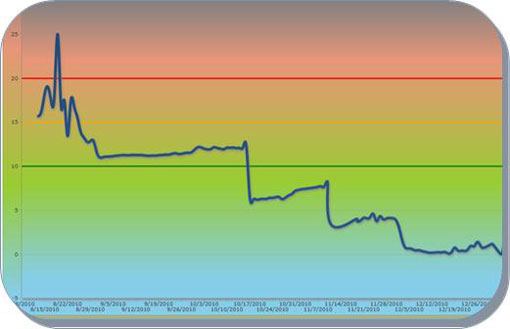 Mr Johnston explained that manual systems often fail when fans aren’t switched off in time. “There are typically periods during warm summer mornings when the interior of the shed will stay cool for an extra few hours compared to the external temperatures, but if the fans are still running warm air will be brought into the store and be counterproductive.”

Advocating an automated system he notes that faster grain cooling is not the only benefit of removing the guesswork from operating fan controls. “We have seen instances of significant electricity savings and with of our wireless system, checks can be made remotely from a secure website link offering store keepers control from any PC with an internet connection, as well as peace of mind.

Highlights on the Monitor and Manage Cereals stand include live working demonstrations of their wireless crop and store monitoring and fan control systems that can be controlled remotely.

Cereals 2011 exhibitor information as supplied by Monitor and Manage.