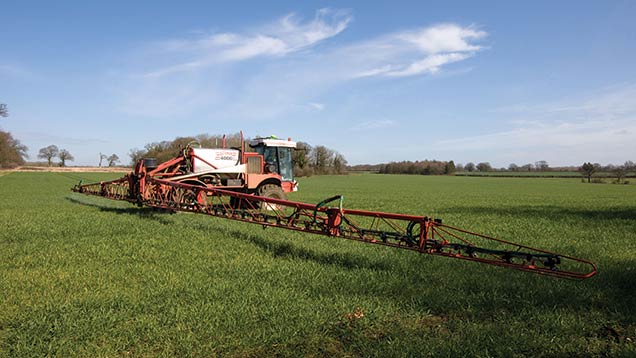 The highest septoria levels since the Defra winter wheat survey began in 1970 were recorded last year and the yield-robbing disease is already being seen this season.

But it doesn’t necessarily follow, however, that 2015 will be in the same mould, says Judith Turner, plant pathology team leader at Fera, who oversees the annual survey of 300 commercial wheat crops.

“Septoria is largely weather driven,” she explains. “So a bad year isn’t always followed by another, as there’s no relationship between disease levels in successive seasons. That’s very different to diseases such as light leaf spot [in oilseed rape].”

“We have virtually no curative fungicide activity left against septoria. So we have to get ahead of the disease by taking the right action early on and using protectant materials.”
David Boothman,  Boothmans Agriculture

The 2014 results show that at least 97% of crops were infected with septoria, across all areas of the country, she reveals. “To give that some context, in a low-disease year some 50% of crops would have the disease, and we would expect to see some regional differences.”

Despite her reassurances, septoria is the disease that agronomists seem to be most aware of as the new spraying season approaches, following another mild winter.

For David Boothman of Boothmans Agriculture in Lincolnshire, the switch to more resistant wheat varieties and drilling later will be of some help, but robust early treatments will be important in managing the disease.

“There are a number of issues to consider,” he says. “One of the most important of these is that we have virtually no curative fungicide activity left against septoria. So we have to get ahead of the disease by taking the right action early on and using protectant materials.”

Fortunately, the T0 spray doesn’t have to be costly, he says. “For most, a triazole/chlorothalonil mix will do what’s required. Using one of the slightly older triazoles, such as cyproconazole or tebuconazole,  at this stage allows you to keep epoxiconazole and prothioconazole for later on in the programme.”

There’s also some evidence to suggest these triazoles are active on different septoria strains to the others, so helping to get good control across the season, he adds.

“Yellow rust is not such a big concern at the moment, which is very different to this time last year,” he says. “But if you’re growing a susceptible variety, it will need careful monitoring.”

There’s no doubt that the mild winter has heightened the disease risk in wheat, especially in early-sown crops, reports Mark Hemmant of Agrovista.

“The cold spell right at the beginning of February will have stopped mildew in its tracks,” he says.

“But there will be septoria and eyespot to think about, as well as take-all in second wheats and rusts on susceptible varieties.”

The T0 spray is an important management tool, he stresses. “It reduces any inoculum that is around, helps with the T1 timing and puts you in control.”

He reminds growers that all fungicides are protectant on septoria, so having a multisite protectant such as chlorothalonil or folpet in the T0 spray is important.

“You need to have a very good reason not to include one. The only situation where it might be different is where you’ve delayed your blackgrass spray. It’s not a good idea to mix Atlantis and chlorothalonil.”

The option to apply just one of the multisite protectants at T0 is only relevant if there isn’t a risk of rust, mildew or eyespot, he advises “If it’s just septoria, then you could apply chlorothalonil or folpet on its own.”

His preference, though, is to cover more diseases, especially given the mild winter. For rust, he suggests either cyproconazole or tebuconazole, together with chlorothalonil. “But you must check the label if you’re using tebuconazole, as some products can’t be applied after GS33.”

An eradicant rust situation – unlikely to be found this year – would require a different approach, he adds. “It’s better to use folpet as the multisite in this situation, as it doesn’t have an antagonism with the triazoles.”

The T0 spray in winter barley will be even more important his year, believes Mr Hemmant.

“One of the lessons from last year was the good yield response from a T0,” he says. “And just like then, there’s quite a bit of disease already showing in barley crops, which don’t have the tillering ability to compensate for it.”

The timing of the T0 in barley is usually early to mid March, he says. “For mildew and rusts, there’s Torch (spiroxamine), while net blotch and rhynchosprium will need some cyprodinil or epoxiconazole.”

Frontier’s Andy Roy has particular concerns over mildew and although recent frost has helped to keep the disease in check, he says it is still in the base of plants, so early control using robust fungicides is essential.

Susceptible varieties such as Glacier and Cassia are most at risk, and although hybrids should fair slightly better this season, they  also have higher inoculum levels.

“Mild autumn conditions and early drilling has exacerbated the problem this year,” he says. “Growers must be vigilant and put in place early spray programmes based on robust fungicides.

“Well-established crops with high tiller numbers set the scene for an emerging mildew issue and although there could well still be some hard frosts, growers must not be lulled into a false sense of security.”

In barley crops, he says that applying a mildewicide early often pays dividends because grain sites are set sooner than in wheat, which is important because there is a direct correlation between grain number and yield.

“At the moment prothioconazole still provides very effective mildew control in barley, while SDHIs bring in some useful activity.

“Under high mildew pressure the addition of a strong protectant such as Talius (proquinazid) may still be justified and helps to reduce resistance pressure on the aforementioned chemistry.”