Having to comply with NVZ legislation and the increasing value of manure and slurry means contractors are at the forefront of helping farmers correctly calculate and target application rates. Independent FACTS adviser Warren Landles looks at what this involves.

Contractors are now responsible for spreading a large proportion of manures which fall under the new closed spreading periods, so keeping up with legislation is a must.

There’s a closed period in place for spreading slurry and poultry manure with high levels of readily available N (>30%) for farms in NVZs, and this will come into force on all farms by 2012.

But FYM applications can be made during closed periods, as can dirty water, provided proper field assessments are made. There will be some restrictions, though. Low-trajectory spreading, under 4m from the ground, will be a requirement by 2012. It’s also expected that any material which is spread on stubble or bare fields has to be incorporated within 24 hours.

From the start of 2010, farmers will be expected to hand their contractor a farm risk map to identify suitable fields for manure spreading. What’s more, maximum N limits for crops and grassland will also apply. Applications to any field must not exceed 250kg/ha of total N in a 12-month period, which equates to 83cu m/ha for typical cattle slurry and 63cu m/ha for typical pig slurry. Broiler litter applications mustn’t exceed 8t/ha (3.2t/acre).

Chief enforcers – the Environment Agency – may need to see evidence of an agreement between the farmer and contractor to carry out field spreading by advocating a “joined-up” approach to ensure a contractors’ capacity can meet farm outputs.

Greater accuracy of application and accountability will be required, explains Dr Ken Smith of ADAS. “The Survey of Fertiliser Practice reflects where investment will be needed. Through their contractors, farmers will be expecting to have access to the best equipment and new technology to help them comply with new rules and make the most of organic nutrients. High N content manures need to be applied at set rates and applied evenly.”

NB Sufficient storage must be in place by January 2012

Some contractors will be updating their equipment and can choose from options including band application, flow metering, weigh cells, in-cab recording software and GPS systems.

“Another benefit of better machinery is that this kit operates at low ground pressure with better weight distribution while higher work rates are achievable. This will become increasingly important just before and after the closed periods,” adds Dr Smith.

He reckons that surface-applied banding techniques are almost as effective as injection at reducing emissions, but are cheaper and easier to use. And he foresees greater use of load cell technology on spreaders to extend the options for contractors. Improved record-keeping through GPS systems could be several stages down the line for most, he adds.

Even with the wealth of new technology available, Dr Smith says don’t forget the basics, particularly when spreading poultry manure and broiler litter. “Knowing the volume of a spreader is important. This should be multiplied by the density of muck and allowances made for spreader over-filling. The typical density of poultry litter is around 0.4-0.5t/sq m and 0.7-0.8t/sq m for layer manure. This can be checked with access to electronic weigh pads or a weighbridge.”

NB On land with sandy or shallow soils, application is permitted between 1 August and 15 September inclusive, provided a crop is sown on or before 15 September.

Working to a practical nutrient management plan that takes account of N contribution from organic manures will set rates for contractors and help reduce the cost of bought-in fertiliser.

ADAS is looking to update and improve software developed some time ago, called SPREADS (Spreader Economic Analysis for Decision Support), which works out the cost and efficiency of manure spreading. “This sort of tool would be useful for farms and contractors in providing detailed costs and work rates. We are hoping to find the necessary funding to allow the software to be made widely available,” adds Dr Smith.

Dorset contractor William Weld takes the same approach to slurry application as he would if applying liquid fertiliser. “They’re one and the same,” he says.

And to help customers comply with new NVZ rules, he believes contractors should be fully aware of the legislation. About 100,000sq m of pig and cattle slurry across 3500ha (8650 acres) of arable and grassland is applied each year up to 20 miles from his West Down Farm base at Warehem. Mr Weld knows full well the economic and environmental consequences of his application method and timing. 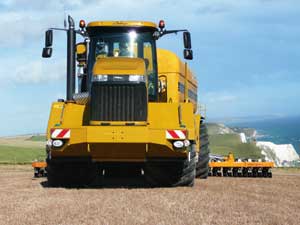 In 2006, he took the decision to make significant investment in a high volume capacity, disc injection system. Low ground pressure was also a must to minimise damage to growing cereal crops.

To fine-tune applications before spreading begins, a lab test is used to assess N availability in slurries as well as P and K levels.

Once an application rate is set, a nutrient management system on his 300hp Terra-Gator 2244 adjusts flow rate based on forward speed through a positive displacement pump sending liquid to injectors on a 8.5m Veenhuis disc injector. A sophisticated hydraulic system keeps discs floating to a depth of about 20mm depth in growing cereals, where around two-thirds of all his applications are made.

Software on board keeps detailed field records which are given to customers.

“This is now a vital service. They appreciate this level of detail to help keep their records up to date.”

Servicing a lot of pig producers by exporting slurry to neighbouring arable units using nurse tankers meant an umbilical system was unworkable. “Even on farms where they use all their own slurry, growers have greater options with this system,” says Mr Weld.

“Although it’s taken several seasons for some growers to gain confidence in allowing slurry applications to their growing crops, once they can see applications can be controlled, demand is increasing.”