Growers were left counting the cost of damaged crops after torrential rain and flooding hit many parts of the UK. The West Midlands was one of the worst areas, with some growers reporting over 130mm rain.

Richard Beldam near Evesham was one of those affected, having lost 8ha (20 acres) of winter wheat when the River Avon burst its banks. “We’ve been incredibly fortunate, a lot of people are far worse off,” he said on Monday (23 July). Apart from the area directly affected by flooding and about 5% which had lodged, the bulk of his 800ha (2000 acres) of wheat looked “pretty good”, but weather had to improve now to save what quality remained, he said. 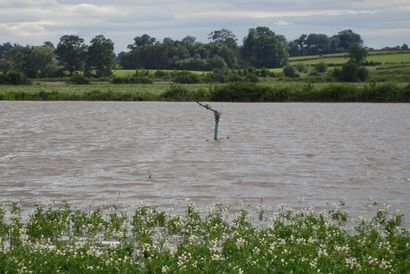 Mr Beldam was more concerned about his 400ha (1000 acres) of oilseed rape, which was all ready to cut. “We did about 150 acres last Wednesday/Thursday, but can’t move because of the ground conditions. It will be much more vulnerable now.”

Nick Oakhill of Glencore estimated 15-20% of oilseed rape and winter barley had been cut by the start of this week, compared with nearer 50% normally. Quality had been good until now, although he feared that could change as many crops were ripe and would soon deteriorate. Yields were very mixed, with rape at 2-6t/ha and barley 3-8t/ha, he noted.

“I don’t think wheat will have come to a great deal of harm yet. Some has lodged, but what’s standing looks OK.”

A similar view was shared by the NFU’s Guy Gagen. “There will be less quality wheat about, but it’s too early to say it’s gone already. One silver lining is that mycotoxin risk is still relatively low according to HGCA monitor sites.”

Nottinghamshire farmer and NFU combinable crops board member Peter Gadd called for processors and traders to help growers by relaxing moisture values from 15% to 16% on all existing cereal contracts and for at least the next three months’ trading (see Talking Point, p33). “If we are to rescue the crop in as good a condition as the whole industry would like, then maybe it is time processors and traders help too.” He also thought oilseed contracts moisture values could be relaxed to 10% from 9%.

The wet weather had also created significant challenges for livestock feed and bedding this season and Mr Gagen advised growers to consult a straw merchant before chopping straw.

Combinable crops weren’t the only ones affected. AICC agronomist Pat Turnbull said some sugar beet in Norfolk was really struggling. “One or two fields have gone backwards.

“Other light land crops look very well, but if we haven’t had the sun, we’ve got to question how much sugar they’ll put on.”