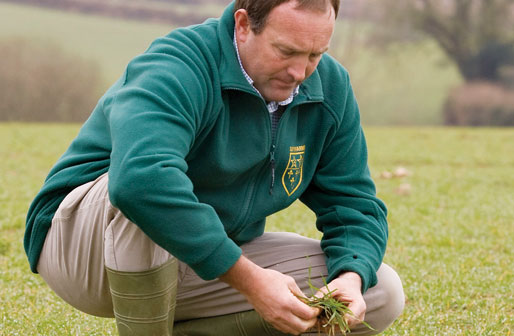 The crop has been dropped altogether after the entire winter triticale area of 49ha (120 acres) yielded just 1t, despite looking good throughout the season.

“Right up until about a fortnight before harvest it was looking perfect,” he says. “Then when we went to thrash some ears out there was just nothing there.”

Mr Perrott says soil fertility or drought stress is unlikely to be the reason as winter wheat on the same block did 2.5t/ha (1t/acre) and there were no obvious pest, weed or disease problems that could have caused such losses.

He is in discussion with his seed supplier about the problems with the triticale and keen to hear from any other growers who have had a similar experience with the crop this summer.

The losses effectively knocked £40,000 off the farm’s arable enterprise bottom line and spring triticale yields were disappointing last year too.

Removing triticale takes the farm from a six- to a five-year rotation across the 600ha (1,500 acres) of arable land, based on home-saved wheat and oats, plus three years of grass/red clover ley.

“We’ve had to put a lot more grass in this autumn because of rationalising the rotation, but with the plans to expand the dairy herd from 500 to 750 cows once the new cubicle housing is complete later next year, we will need that extra grass anyway,” he says.

Mr Perrott estimates each cow requires 1.25t cereals a year and is confident there will be enough for the expanded herd from the reduced area.

Currently, there is normally a small cereal surplus to carry over as feed or sell. “I’m normally pretty cautious about selling anything until we can see the end of winter and know we won’t need the extra feed.”

Having less arable cropping and 50% more cows also means there will be more slurry and manure available for the land that needs it, he adds.

This should benefit yields and he hopes to get average cereal yields up to around 1.75-2t/acre in a couple of years’ time. “Since going organic I’ve always worked on the principle of half the yield and double the price.

“The organic price of £240-250/t isn’t high enough compared with non-organic grain, but conventional production on this land struggled to do much more than 3t/acre, so to get anywhere near 2t/acre would be a real result.”

This year was Clinton Devon Farms’ seventh in organic production and once again highlighted the need to remain flexible.

Not rushing into drilling is the main lesson when it comes to establishing crops, says Mr Perrott. Autumn drilling usually starts in the second or third week of October, giving plenty of time to encourage a flush of weeds or volunteers in a stale seed-bed and means crops aren’t too far forward or tillered, reducing lodging risk.

Spring crops are normally drilled from mid-March with some cereals sown up to the middle/end of May. “We want spring crops to get going right away if they’re going to outgrow any weed competition, so we have to wait until the soil’s warm enough to do that.”

Before converting to organic Mr Perrott feared the farm could be overrun with cleavers and wild oats, however this has never materialised. “It’s like they needed the fertiliser and fungicides to do well, because neither has been as virulent under the organic system. I worry we may be increasing the wild oat seed bank in the soil though.”

Other weeds are an increasing problem however, notably couch, docks and thistles. Achieving a completely clean grain sample isn’t the number one priority as nearly all crops are fed to the farm’s own cows but he is still keen to keep a lid on weeds to protect yield.

For couch control, land is ploughed immediately after combining to avoid letting the weed green-up and set more rhizomes. Docks are also ploughed in and particularly bad fields may be ploughed twice. “It doesn’t kill them, but does set them back enough to give the crop a decent chance.”

Red clover left for mulching also helps by shading out couch and docks, he notes. Thistles are his biggest concern and control can be variable. “There’s nothing really that outcompetes them so the only thing we can do is top them before seed is set. Bindweed can be a problem on some fields, often preventing combining. In these cases crops are taken as wholecrop silage instead.”

Pests and diseases are not a major concern in organic crops across the farm and slug pressure is lower than under a conventional system, possibly due to more natural predators.

Fewer tillers and thinner crops also reduce disease pressure, however where soil fertility is higher than normal for example, on sites of in-field manure heaps), and crop growth is more prolific, mildew can be an issue. “We’ve also had a lot of yellow rust in triticale before,” he adds.

One of the biggest positive outcomes of organic conversion has been the investment in the slurry handling system that allows 25-30% of the cropped area to receive slurry piped around a ring main and applied via an umbilical system.

This main is currently being expanded to reach around half of the arable area and would be a valuable asset in any conventional system, says Mr Perrott.

“The organic system can’t be sustained without manure or slurry and if we can spread as much as we can within the NVZ limits, through a relatively cheap umbilical system, it’s got to be a better use of money than tankering it around or buying-in organic manure.”

Mr Perrott has found the nitrogen value of the slurry to be lower than the 3kg/t guideline in the NVZ handbook largely due to the high volumes of rainwater going into the lagoon. “Typically we never get more than 1kg N/t.”

Spring slurry applications tend to be later than in conventional arable systems, normally around April, as this avoids encouraging a large number of tillers, which can in turn lead to more lush crops and higher disease/lodging pressure. No slurry is needed on wheat after clover.