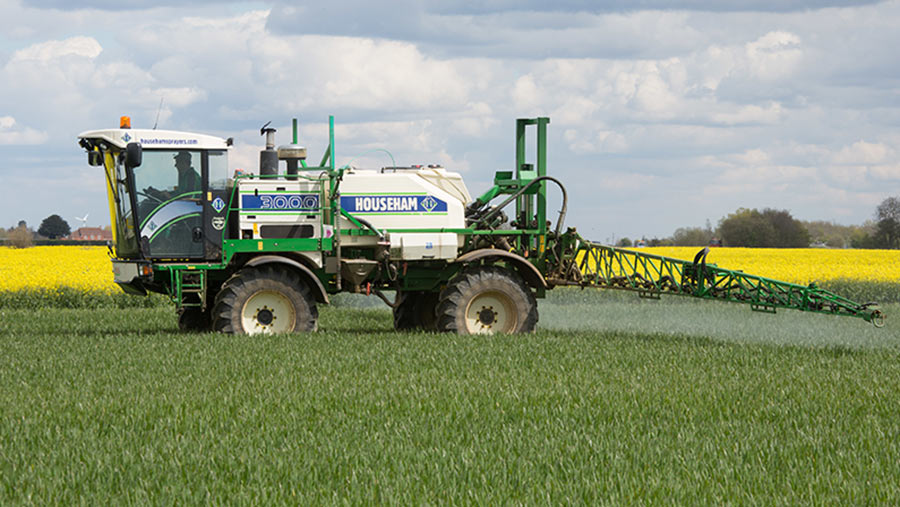 Higher wheat prices may give hard-pressed growers more leeway to spend more on disease control, as many late-drilled crops start to recover.

Late-sown wheat crops have come out of the winter thin and patchy, but yield prospects are looking better with nitrogen fertiliser applied and the benefit of a dry sunny spring to help plant growth.

Paul Gruber at agronomy group ProCam says with higher wheat prices, many growers can afford to use an SDHI fungicide at T1, often applied in late April, and see a 0.5t/ha-plus yield boost even if the season turns out wet or dry.

“On the whole, crops look a lot better than we expected, and for a little extra spend, the return on a grower’s investment could be a lot greater,” he says.

The decision to omit an SDHI at the T1 stage and go with an azole/multisite mix might save a grower £10-15/ha, but from his group’s trial data, the inclusion of an SDHI would gain the grower £80-90/ha in extra yield.

In the dry season of 2018, the trial at Cawood, near Selby, North Yorkshire, showed a 0.65t/ha yield advantage using SDHIs at T1 and T2, compared with just an SDHI at T2 on the variety Santiago.

By contrast, in the wet season of 2019 with heavy rains in late May and into June, the response from using two SHDIs compared with one SDHI was 0.53t/ha across three varieties, Barrel, Kerrin and Gravity.

Mr Gruber says that in a dry season, the use of a SDHI (and also a strobilurin) gave crops a physiological greening effect, while in the wet season of 2019, the improved level of septoria control was clear.

As the T1 timing approaches, when leaf three is fully emerged, he argues the use of an SDHI will help protect against disease spread in a wet May and also any delay in applying the all–important T2 flag-leaf spray.

With yellow rust likely to be a more obvious threat in late-drilled thin crops than the wet weather-loving septoria, he reminds growers of the importance of including a rust active fungicide in the T1 spray.

Although relatively inexpensive, azoles, such as tebuconazole and epoxiconazole, give a quick knock-down effect on  yellow rust, he suggests that growers may select the most rust active and persistent SDHI Solatenol (benzovindiflupyr) such as in Elatus Era at T1.

On the other hand, if septoria is the greater threat, the SDHI Xemium (fluxapyroxad), such as in Adexar and Revystar, could be key for inclusion at the T1 stage.

However, very late January and February drilled crops – which may not reach T1 until early to mid-May –  might not need an SDHI, and growers could use an azole-strobilurin-multisite mix, says Mr Gruber.

Even for these late-drilled crop, he sees no reason why they cannot yield 8t/ha-plus with good care and attention throughout the season.