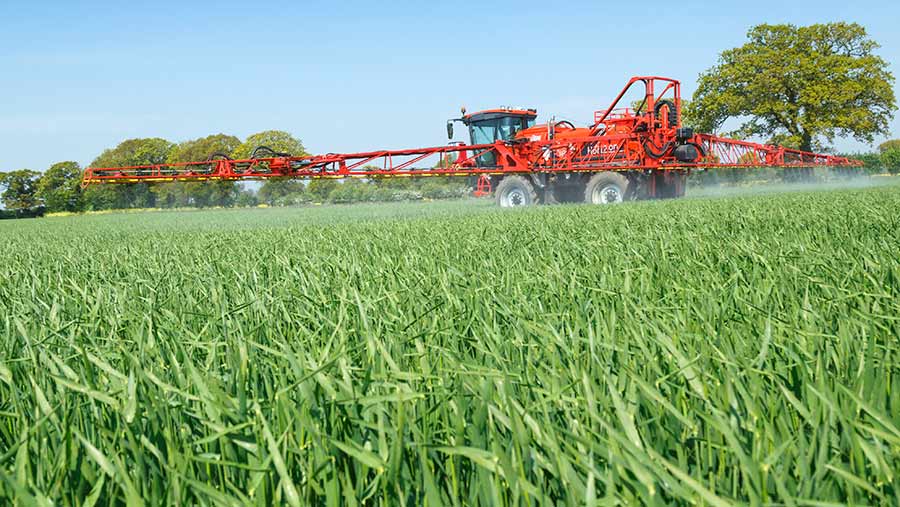 Barley growers need to be aware of the conditions that favour the fungus responsible for causing ramularia leaf spot, as the chemical control options are extremely limited.

“Continued dry weather doesn’t suit the fungus Ramularia collo-cygni, which is why we didn’t see big problems last year. Ramularia needs moisture in the leaf. If it’s warm and wet, the fungus is encouraged to grow inside the barley plant,”  he says.

See also: Mildew in barley: How to reduce risk and control the disease

Even if conditions are favourable, symptoms of the disease are not initially apparent, only appearing on the upper leaves after flowering, from growth stage (GS) 72 onwards, once the plant has come under stress.

“That’s typical of some endophytic fungi. In the case of ramularia, it grows within the host without causing harm until the plant starts to senesce. That’s the trigger for it to start producing toxins, which then cause the brown lesions on leaves.”

Its identification is important, as the fungicide armoury for its control is restricted to just one active ingredient, after the fungus developed resistance to other widely used products.

As a result, without a robust risk forecast, growers are advised to include up to 1 litre/ha of chlorothalonil in the T2 timing.

“That’s the only fungicide option remaining for ramularia control,” stresses Dr Havis. “The strobilurins were overcome by the pathogen some time ago, and since 2017 the azoles and SDHIs have also become far less effective.”

Whether or not to include chlorothalonil at T1 as well is a common question, he reveals. “It tends to be in T1 sprays as part of an anti-resistance strategy and it certainly won’t do any harm, but it doesn’t have a significant effect on the movement of the fungus.

“If supplies of chlorothalonil are limited, for whatever reason, then save it for the T2 timing. Our work shows that GS45-49 is the optimum time.”

Syngenta, the manufacturer of chlorothalonil brand Bravo, believes there is a case for bringing the T2 timing forward in winter barley, aiming for GS39-45, as company trials conducted in 2018 showed better disease control and higher yields from an earlier spray.

“We’re not advocating an extra spray and GS39 does fit with the ethephon-based plant growth regulator timing, when growers are going through the crop anyway,” explains Iain Hamilton, Syngenta’s field technical manager.

He adds that chlorothalonil is a protectant fungicide, so waiting until the awns have emerged could be too late for winter barley crops in England.

“There are a number of variables with ramularia, including the stress factors that influence when it appears, so the earlier timing may be better where any stresses come in sooner rather than later in the season.

“It’s interesting that in 2018 we also saw better net blotch control from this approach, as well as reduction in brackling.”

An alternative approach is to use a sequence, opting to spray at GS39 and GS59, with chlorothalonil being used at GS39 and Elatus Era (benzovindiflupyr + prothioconazole) applied at GS59.

“That also worked well in our trials and may be the best programme where brown rust comes into crops later on. With ramularia, the key is to get the chlorothalonil on at GS39-45.”

Mr Hamilton accepts that the ramularia timing work needs repeating, as 2018 was such a dry season. “We don’t know if the results would have been the same in a very wet year, or if it’s the same for spring barley.”

GS39 application as a ‘holding operation’

The awns visible timing (GS49) has traditionally given the best responses in ramularia trials, confirms Clare Bend, head of technology and services at Agrii.

However, the shift in sensitivity of the ramularia pathogen to the SDHIs and azoles could change best practice, she suggests, with a GS39 application becoming a useful “holding operation”.

“We are seeing this happening on farm now for practical reasons, as it can be tank mixed with an ethephon-based plant growth regulator,” she says.

“Interestingly, in 2018, our trials in hybrid barley showed a better result when chlorothalonil was used at GS39, rather than at GS45 or GS59.”

As the fungus expresses itself when the crop in under stress, this result may have been seen because the crop came under stress earlier than usual in such a dry year, she says.

“The ideal control timing seems to range from GS39-GS49 because the variables with ramularia expression – variety, light intensity, leaf wetness, crop development and temperature – are different each year and there is a complex relationship between them and the pathogen.”

For low-potential crops, where only one fungicide is used, the earlier timing is a useful compromise, adds Mrs Bend. “It’s not practical in spring barley, as it grows so rapidly. So the GS49 timing is more appropriate for these crops.”

Using chlorothalonil at T1 as well as at T2 makes sense in high-risk seasons and for stewardship purposes, she says, but the trials evidence for this varies with the season. “If there’s early stress at tillering, for example, it helps.”

Other Agrii advice is to make good use of leaf testing, so that any nutritional stresses can be corrected, and to avoid drilling into poor seed-beds.

“In theory, biostimulants should help reduce ramularia symptoms, but there is very little supportive trial evidence for this.”

She has seen good control of ramularia from an alternative multisite, folpet, in trials.

“Much more work has been done with chlorothalonil, so there’s more confidence in it. But we may need to consider other products if chlorothalonil does disappear.”