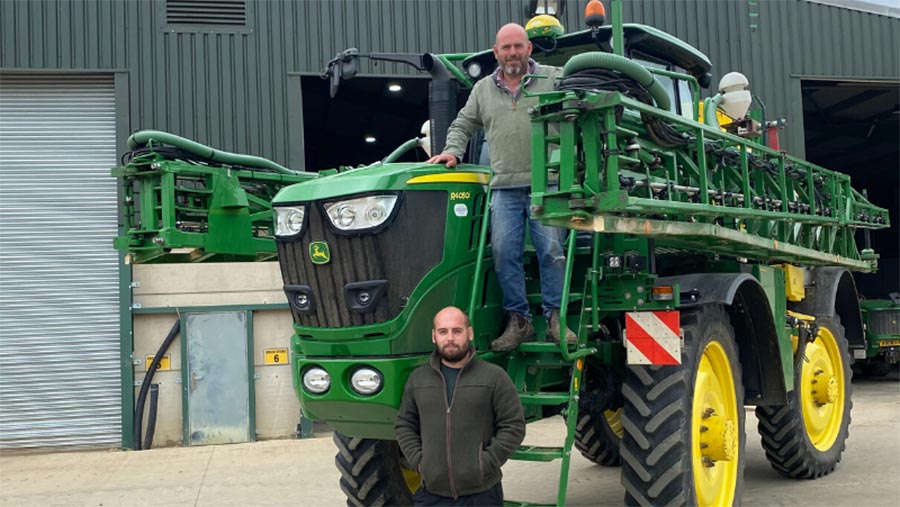 The AHDB’s new Wisbech Monitor Farm hosts, father and son Andrew and Sam Melton, are focusing on the challenges to profitability as they start their three-year stint as part of the Monitor Farm network.

Most immediately, the legacy of the very difficult 2019-20 cropping year means they are looking at ways to get the farm’s rotation back on track, while continuing to bring machinery and establishment costs down without any detriment to yield.

As part of that, both men are considering whether they should persevere with oilseed rape, if cover crops have a remedial role on their heavy soils and how they can make best use of all the data that their farming and contracting business is generating.

Further ahead, there is a plan to investigate controlled traffic farming as a means of reducing compaction, try out the use of weather stations and disease modelling for their potential to reduce inputs and calculate whether to invest more in drainage.

“Margins are the driver behind all of this,” explains Andrew. “We want to maintain our high output and attention to detail, while bringing our costs down.”

Farming a total of 1,430ha from their base near Wisbech, the family farm partnership of H Melton & Son covers 700ha, with a further five stubble-to-stubble contracting farms adding 730ha.

In addition, contract fertiliser and spray applications are carried out, as well as potato cyst nematode soil sampling.

As harvest 2020 approaches, just one-third of the winter wheat that they had planned is in the ground, so the crop area has been made up with spring wheat and some additional spring barley.

“It was so wet last autumn and winter that we had to take the decision to stop drilling in such challenging conditions,” recalls Andrew.

“We went for Group 2 spring wheats, as we mostly grow for milling and biscuit premiums in a more normal year.”

The weather was also responsible for some very late harvesting of their 2019 sugar beet crop, which meant that they couldn’t drill the planned cereal crop afterwards.

Instead, that land had a cover crop drilled on it in June to help with soil structuring and get it ready for drilling winter wheat this autumn.

“We don’t normally fallow land,” says Andrew. “But some of the beet wasn’t lifted until March, so that had repercussions. Hopefully, the cover crop will help get it back in order.”

Like many other farms, oilseed rape has also taken a hit – for the first time ever they saw half of the 115ha of the crop taken out by flea beetle, leaving them with 60ha.

“The big question is whether we stick with it or not,” says Andrew.

“We tried two different establishment methods and grew both hybrid and conventional varieties, with no link to either as regards flea beetle damage.”

His gut feeling is that drilling as early as possible will be the best way of avoiding beetle feeding, but has fears about larvae numbers with that approach.

“We’ll make a last-minute decision based on the conditions and will stick to conventionals, to keep costs down.”

Given the difficulties encountered, he is taking the opportunity to look at winter linseed as a possible replacement for oilseed rape and will be growing a seed crop for harvest 2021.

Soya has been grown in the past, but its late harvest date made it difficult to get the following wheat crop in.

Machinery costs are always being scrutinised, with telematics being used to monitor fuel use and cultivations.

Reducing the depth of tillage and the number of passes has been a gradual aim, with the business moving from a plough-based system to shallow tillage over the past few years.

The purchase of a JD750a drill last autumn will allow them to take that further, with the intention of direct drilling crops where conditions are suitable.

“We did direct drill an area of our spring barley with it this year. Soil health is important and we are committed to getting our approach right on clay soils, so will take every opportunity to learn.”

Precision farming has already been adopted by the business, with variable rate nitrogen applications and seed rates being used and specialist software helping to analyse costs and keep track of their contract farming operations.

The next step could be NDVI web-based software, believes Andrew, as he starts to investigate new and existing platforms for data management.

“We’re producing lots of data from different sources and making good use of some of it,” he says.

“Now we’re keen to look at new ways of pulling it all together, so that we can really interrogate it to help with decision-making.”

He plans to try a couple of the latest platforms and report back on his progress at the Monitor Farm meetings.

“Digital agriculture is being heralded as the future, so it will be interesting to see what these systems have to offer.”

Having said that, he notes that farm profitability is key.

“As we move to a farming policy based on public money for public goods, we need to know whether new technology can help us to prepare and adapt.”