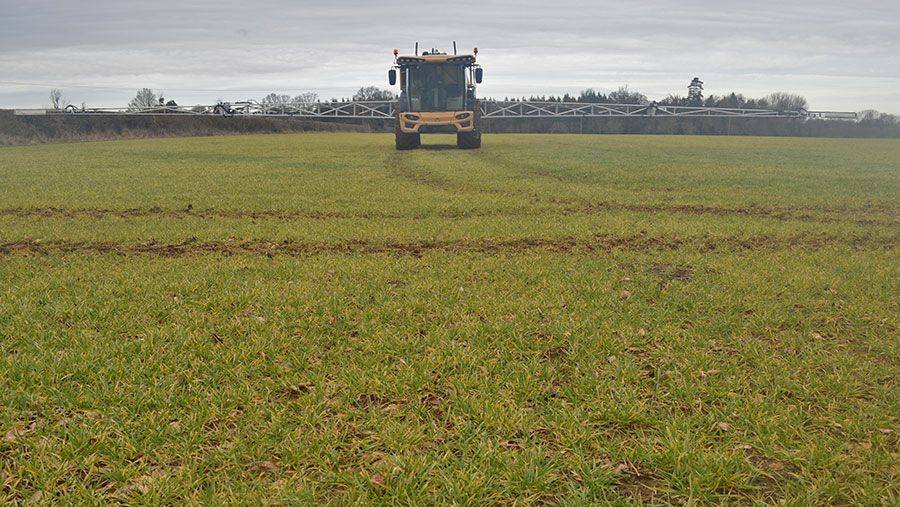 One Gloucestershire winter barley field has just received its first dose of nitrogen as it was in “desperate need” of feed after recent wintry weather had turned the crop yellow.

Paul Jannaway, who contract farms in Wiltshire, Oxfordshire, Berkshire and Gloucestershire, said one of his fields on the edge of the Cotswolds, like many other crops in the area, had suffered as a result of the recent snowy conditions.

“The crops were looking a healthy green colour a couple of weeks ago, but after the big freeze, they’ve turned yellow due to the cold stress that the barley has endured,” he said.

Mr Jannaway has just put 80kg/ha of liquid nitrogen on in recent days.

However, with the wet conditions and soil texture, he admitted they have to be responsible with their timing for applying the spray, to ensure it doesn’t run off with the slope of the field.

He explained the winter barley was sown on 12 October and is doing well despite the yellowness, expecting it to bounce back soon, following the cold spell.

“I’m not concerned at this point, the fields should respond well to the nitrogen. Last year we had an exceptionally dry spring, this year we’ve had the snow, the unpredictable weather is just a part of farming we learn to cope with,” he added.