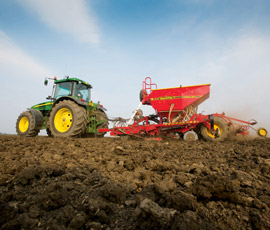 With soil temperatures remaining at a lowly 2-3C, Mr Brown doesn’t see any spring rape drilling taking place until at least the third week of April.

His winter rape crops on north or east facing slopes have taken a turn for the worst in recent cold and windy weather, prompting plans to replace the worst crops with an alternative spring crop.

“If spring rape is drilled this late, I wouldn’t want to budget on it yielding much more than 1.6t/ha.

“Given the extra cost of cultivations and seed, the winter crop it is replacing would only need to yield 1.4t/ha to give an equal margin, which is achievable in clean, weed free crops,” explains Mr Brown.

Meanwhile in Scotland, Hamish Coutts, AICC agronomist in Perthshire has seen his wheat crops deteoriate after the latest round of frosts.

After a brief warm spell, some forward crops have attempted stem extension, only to be knocked back by the continuing cold.

“Some will not survive. If there is a glimmer of hope it is that the winter barley area does not appear to have suffered to the same degree as wheat and oilseed rape,” notes Mr Coutts.

He attributes much of this to the barley being drilled before the drop in temperatures during the autumn, allowing it to develop the strength needed to endure the extended winter.

In the East, Strutt and Parker agronomist Ryan Hudson is witnessing the last of the sugar beet and peas being sown in his area, but his immediate concern is catching up on spraying.

“Given the extra cost of cultivations and seed, the winter crop it is replacing would only need to yield 1.4t/ha to give an equal margin, which is achievable in clean, weed free crops.”
ProCam agronomist Nick Brown

He admits compromises will have to made to ensure crops get sprayed before the cut-off dates are reached for certain chemicals, particularly herbicides.

“Care also needs to be taken with large tank mixes and this will be vital on the stressed crops than many growers have in the ground,” says Mr Hudson.

“We cannot afford to check these crops at all,” he adds.

Most of his rapes have received a post-emergence broad-leaved weed herbicide of Galera (clopyralid + picloram) or Shield (clopyralid) and Mr Hudson has started applying grassweed herbicides in wheat and barley.

He warns that blackgrass is large in places and ensuring good quality application of the post-emergence graminicides will be crucial to achieve good results.

“In the untreated crops some of the bigger blackgrass will be a challenge for the products we have,” he explains.

He also points out that although disease control in wheat has not been a problem thus far, things can soon change.

Triazole efficacy to eradicate septoria has slipped, so he urges growers to adopt a preventative approach as much as possible.

In Scotland, potato crops planted under fleece three weeks ago have not moved according to Matthew Smallwood, potato consultant with SAC.

Again, soil temperatures are the limiting factor and Mr Smallwood says there is a conundrum of which variety to plant and when.

“Most varieties have around six weeks to break through before emergence issues can occur and at current temperatures, this could easily be exceeded,” Mr Smallwood explains.

Little potato disorder, a condition that occurs when potatoes are planted into cold and wet soils and leads to premature formation of tubers, could be an issue in current conditions.

In addition, rhizoctonia and free-living nematodes are also high risk due to prolonged emergence, so Mr Smallwood advises that an in-furrow fungicide along with a nematicide should be used.

“Planting out of cold store is advisable too, so seed is no warmer than the soil it is being planted into. Otherwise it can be shocked into dormancy,” says Mr Smallwood.