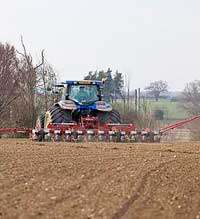 Spring barley and bean drilling has started and the top-dressers are out in force as soils dry out, our Crop Watch bloggers are reporting.

But the cold snap has taken its toll on oilseed rape and cereal crops with frost damage that could reduce yields.

Oilseed rape crops with large canopies going into the winter had lost outer leaves and showed signs of stem cracking, said AICC agronomist Ruth East from Lincolnshire. “But smaller crops are not exhibiting these symptoms.”

Winter cereals were suffering from frost lift and would have to be rolled to consolidate roots when there were no night frosts forecast, she said.

Avadex (tri-allate) was being used to control problem blackgrass in spring barley and nitrogen had been applied to most second wheats, winter barley, backward oilseed rape and thin first wheats, he said. “But the cold and dry weather means they are yet to respond.”

Yellow rust pressure had subsided, but crops would receive a T0 fungicide according to risk, he said.

Soil temperatures were “creeping up” but it was still too cold to apply Atlantis (mesosulfuron + idosulfuron) and Broadway Star (pyroxsulam + florsulam) in winter wheat, said Arable Alliance agronomist David Martindaleo from Yorkshire.

Growers should look out for thistles, mayweed and cleavers in oilseed rape crops that didn’t received a pre-emergence herbicide in the autumn, he said. “Consider treating high populations with clopyralid and picloram.”

NVZ rules meant more slurry could be applied to growing crops in the spring, allowing rates of artificial nitrogen to be reduced, he said. “It seems to give the crop a boost that can’t quite be matched from fertiliser out of the bag.”

Agrovista agronomist Swaran Bachoo from Hampshire reckoned spring beans drilled two weeks ago should appear by 16 March. But growers wanting to plant peas should hold off until soil temperatures reach 13C, he said.

Frost had caused de-waxing in some oilseed rape crops and good growing conditions were needed to turn them around. Light leaf spot was present in some crops and needed treating as soon as possible, he said. “However, spraying under current conditions could reduce efficacy and cause crop damage.”

He had found septoria in wheat on older leaves, but it had been slowed by cold weather, he noted. “Barley crops are looking clean, but are in need of warm weather.”