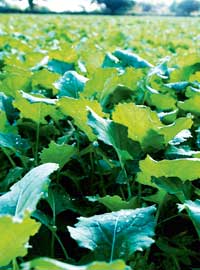 Rain, or the continuing lack of it, has been a major concern for Farmers Weekly’s Crop Watch agronomists this week.

All regions are reporting crops suffering drought stress and dry seed-beds are delaying both drilling and herbicide applications.

Moderate winds over the past couple of weeks had made spraying impossible and had sucked moisture from the soil, said East Lothian AICC agronomist Andrew Riddell. “It’s too dry for pre-emergence herbicides so it is best to wait until early post-emergence.”

“Some are at two to three leaves, some have been drilled into dust and won’t appear until it rains, and many fields are being left due to the poor state of the seed-bed.”

However, volunteer barley was growing well in oilseed rape and flea beetle was also having to be addressed, even where seed dressings had been applied, he added.

“The larvae borrow down into the leaf petiole and can result in aborton of infected leaves.”

Wheat planting had prgressed well, despite the lack of moisture, but determining the correct seed rate had been challenging, he noted. “In bone dry soils they need to be kept up to at least 275 seeds/sq m.”

Stale seed-beds had shown little sign of weeds or volunteers, said Farmers agronomist Neil Donkin. “Growers either have to wait for rain to produce some growth or carry on drilling and try to tackle the problems later – most are opting for the latter, but it will result in a heavier burden of weed and volunteer cereals in the next crop.”

All four agronomists reported low slug numbers, but warned they would return promtly when the rain returned. “On areas where damage is expected get some traps out so that you can easilly assess population thresholds when the moisture returns,” said Mr Riddell.