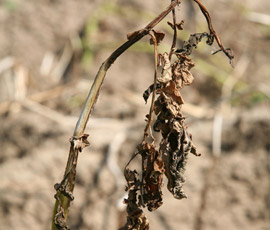 Once potato crops emerge and temperatures rise growth will be rapid and growers are urged to look out for blight and protect new growth with a fungicide.

That is the advice from independent potato agronomist John Sarup, who is favouring an application of mandipropamid, included in products such as Revus.

He points out that after last year’s high blight levels will have the chance to transfer over to the new crop from sources such as infected seed and out grade piles.

“Keeping the lush new growth protected from blight will be important and mandipropamid is the best fungicide to use at this early stage and it is extremely rain fast,” adds Mr Sarup.

He notes the main source of inoculum is always the out grade piles and urges growers to keep them covered with black plastic to prevent the haulm development which allows the disease to spread in the wind.

Where possible, growers should also take advantage of the extension of authorisation for minor use (EAMU) for Reglone (diquat) to knapsack spray any haulm growth on the waste piles.

“Two applications are approved with a maximum individual dose of 0.4ml of product per square metre,” says Mr Sarup.

Meanwhile, wheat crops are receiving their ongoing fungicide programmes across the country, but Devon agronomist Neil Potts has seen his T1s delayed.

He has also seen his wheat crops dropping a leaf, which results in final leaf three emerging at growth stage 31, rather than the usual GS32.

“It now means they are not quite so far behind in terms of development as they were a month ago, but still about 10-14 days behind the norm,” says Mr Potts.

“Keeping the lush new growth protected from blight will be important and mandipropamid is the best fungicide to use at this early stage and it is extremely rain fast.”
Independent potato agronomist John Sarup

Wet and windy weather has meant that Mr Potts’ T1 fungicide applications, with the final leaf three having fully emerged and, in some cases, leaf two on its way out.

He warns against delaying the T2 spray to squeeze the most value out of a delayed T1, as the flag leaf application remains the most important fungicide input.

Seed weevil numbers have been unusually high in oilseed rape crops and in many cases have exceeded the thresholds required to justify an insecticide spray.

In Yorkshire, Arable Alliance agronomist David Martindale is having a recurring nightmare with his oilseed rape crops, still writing off the crops that haven’t caught up.

Among the remaining crops he points out that seed weevil numbers are usually high on headlands, but this year he is seeing them right across the fields above threshold.

The pest lays its eggs within the canopy, with larvae burrowing into pods and feeding on developing seeds. The holes created then allow access for brassica pod midge, which can cause problems later in the season.

In the South, AICC agronomist has treated with an insecticide, included in his mid-flowering fungicide spray for sclerotinia.

“I’m also looking out closely for gout fly eggs in my spring wheat, but the damage I was fearing never actually happened when we went back to spring wheat a few years ago.

“Having said that, I will never forget the awful memory of devastated crops in the noughties where over 90% of ears could be damaged and yield losses were horrendous,” says Mr Hunnisett.

In the East, Farmacy adviser Philip Vickers is having issues with weed in his sugar beet crops, with herbicide treatments delayed.

Knotgrass is his biggest concern, with the troublesome weed in high numbers in some fields.

“The delay in treatment has led to bigger weeds, but with good growing conditions and a well timed programme, good control should still be achievable,” he adds.