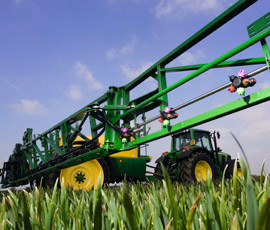 Some tricky decisions face growers and agronomists this week as crop growth begins to accelerate, but don’t miss a T0 on backward crops.

Disease pressure in winter wheat remains low, which may tempt some growers to miss the disease-holding fungicide and hold off on applications until growth stage 32 (T1).

However, Perthshire independent agronomist Hamish Coutts says do that at your peril, with backward crops needing more care and attention to fulfill their potential.

“The T0 should include a low cost fungicide and some foliar nutrition. Missing the spray may turn out to be a high risk strategy, with last year’s scars still showing,” he explains.

Mr Coutts refers to the lack of spray days around the T1 timing last year, which left crops exposed to spiraling disease pressure without T0 protection.

“My inclination is to make the best use of any weather window,” he adds.

In the South, ProCam agronomist Nick Brown is planning to use lower rates than he expected in his winter wheat fungicide programmes.

He points out that inoculum levels of septoria and yellow rust are lower than in previous years and a predominantly dry weather forecast will not see a rapid change.

“This is no reason for complacency, but combined with the likely short interval to the T2 timing, it may mean less robust rates could suffice,” he says.

Away from winter crops, spring drilling is largely complete. Finishing off linseed planting this week, Strutt and Parker crop consultant Ryan Hudson described the seed-bed as a “dust bowl”.

His spring crops have been well established, but those coming through need some rain to maintain good growth in the coming weeks.

“There was 26mm of rain this April, compared with 116mm last year, which tells it’s own story really,” he says.

Despite the dry, early April, drilled spring barley is looking healthy and Mr Hudson is wishing he’d have replaced more ailing winter rape with the crop.

He points out that some of it has failed to grow away from pigeons, and in the West David Morris, agronomist with Countrywide Farmers, has had similar problems.

“The T0 should include a low cost fungicide and some foliar nutrition. Missing the spray may turn out to be a high risk strategy, with last year’s scars still showing.”
Perthshire agronomist Hamish Coutts

His struggling rape crops received some encouragement in the form of nutrition, which was intended to rekindle active growth, but he has instead seen them throw in the towel.

“We have either re-drilled or increased the fallow area for this year. The financial costs and risks of all this have been considerable,” says Mr Morris.

A local straw poll in Mr Morris’ area hints at a 50% reduction in the winter wheat area compared with 2012 and many established crops late and struggling.

The same is also true for winter oilseed rape, with those crops in the ground holding on for dear life with limited yield potential.

“Arable farming in our area in spring 2013 seems to be an increasingly expensive accumulator bet on receiving good growing conditions in May and June,” adds Mr Morris.

In Scotland, potato planting continues and SAC potato consultant Matthew Smallwood says Scottish growers don’t have much to complain about.

Planting has continued largely uninterrupted and soil temperatures have been reasonable, he notes. Despite this, early-planted crops have been slow to emerge.

“Unchitted, fleeced crops should make it out of the ground within the next seven days, which is around seven weeks after planting,” he observes.

He believes open crops will be a week to ten days behind, and imminent emergence turns thoughts to herbicide programmes.

A metribuzin + linuron + diquat mix usually suffices in Scotland, says Mr Smallwood, but two problem weeds are on the rise north of the border.

“In my view the most cost effective way of controlling couch and also volunteers on rented land is to pay the landlord to apply a decent rate of glyphosate at some point during the rotation,” he concludes.