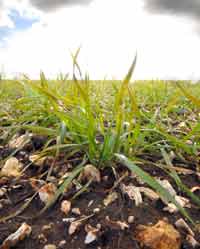 In the east, spraying had started in earnest, said Prime Agriculture’s Marion Self from Suffolk. “Pre-emergence sprays on spring crops and clopyralid sprays such as Galera on the oilseed rape are close to completion.” Some Atlantis (mesosulfuron + iodosulfuron) had also been applied to wheat in ideal conditions, she noted.

Septoria was present on lower leaves of all wheat varieties, but its rate of development would depend on the level of varietal resistance, temperature and rainfall, she said. “This is particularly important from April to June,”

Yellow rust had been spotted in Oakley and T0 sprays would begin soon. “Ideally, these will be timed two to three weeks ahead of the T1 fungicide timing which is usually in the second or third week of April – in many cases these will be applied with the first split of chlormequat.”

In Devon, forward wheat crops were approaching GS30, said Matford Arable agronomist Neil Potts. “They will receive a T0 application of fungicide along with some plant growth regulator and any required minor nutrients by the end of the month.”

Septoria was prevalent in most crops, but there were no signs of rust or mildew. “Septoria control will be the main focus at T0 and T1.” Barley crops had come through the winter well but some was suffering from “aggressive” rynchosporium, particularly Saffron, he said.

Oilseed rape canopies had been hammered by cold weather, but nitrogen had been taken up and although there was little sign of growth, crop colour had improved, “With milder and wetter weather now upon us the situation should change rapidly, but fungicide choice at stem extension will be interesting this year.”

Drilling and fertiliser spreading had made good progress in Hampshire, said Chichester Crop Consultancy agronomist Tod Hunnisett. “But, winter rape is purple in colour and had not yet responded to any applied nitrogen.”

Outstanding autumn herbicides had been applied where conditions were suitable and most crops had received their first dose of nitrogen and sulphur, he said. “I haven’t found any yellow rust in crops, but the situation can change very quickly.”

Further north, soil temperatures were warm enough for Othello (mesosulfuron + iodosulfuron + diflufenican) to be applied to control annual meadowgrass, said David Cairns from McCreath, Simpson & Prentice, Northumberland. “I don’t want to risk mixing it with T0 fungicides so will try and get on as soon as possible.”

Winter wheat was starting grow and was free from disease, he said. “But, we always get a return from our T0 fungicides so we will be applying a triazole/chlorotoluron fungicide either next week or early April.”