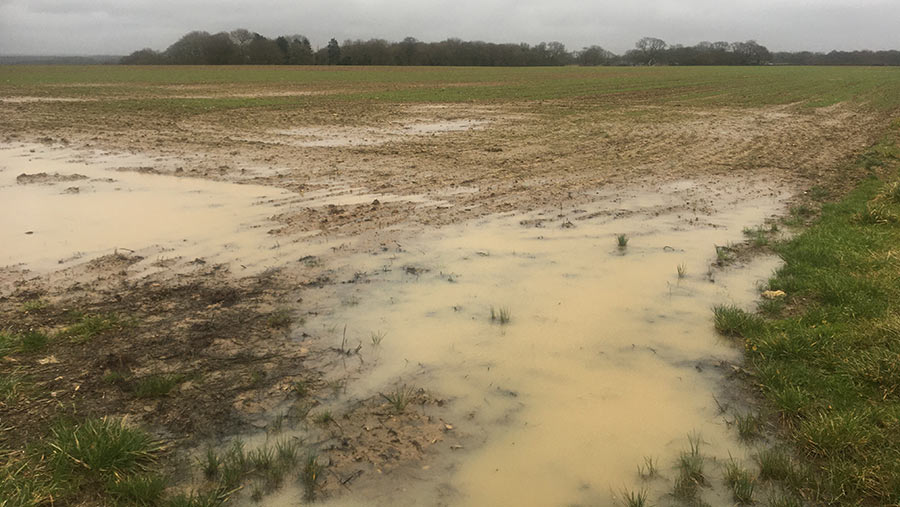 It’s nearly three months since the last Crop Watch and growers are still grappling with the winter monsoon, which has resulted in many soggy fields still undrilled.

Farmers lucky enough to have got some winter cereals drilled are being warned that their crops are more susceptible to damage from graminicides, having been sat in waterlogged conditions.

Oilseed rape crops are looking very variable and a failure to get the full herbicide programme on this crop means growers will need to consider how to manage the likely higher seed return in the following crop.

Where I live in Hampshire, our annual average rainfall, in old money, is about 39in. Conveniently, that relates to roughly 1m.

See also: How to tackle weeds after a tough start to the season

So nearly two year’s worth of rain over the past year, which included one of the supposed worst droughts since 1976.

Any thoughts of late drilling winter wheat varieties have now disappeared. The only ground left to drill is the stuff that couldn’t be drilled earlier anyway because it was too wet, and it certainly isn’t going to dry out in any sensible timescale now.

So that means plans B and C (and possibly D) have to be called into action. People scared about the massive potential spring barley area (and consequent drop in value) are looking at various alternatives.

Sheep feed
I have one grower who discovered – after scanning his ewes – that he has 50% more twins expected than normal, so some of his wheat ground will be going into an oats/vetch mix for haylage.

Another dairy farmer, who struggled to get his maize off, will be whole-cropping some kind of spring cereal to top up his stocks. And, of course, there will be a significant area of fallow.

What does amaze me is how well some of the late drilled, opportunity-snatched wheat crops look. Unlike sheep, it seems that all a wheat plant wants to do is survive, and it will do anything to do so.

With some judicious expenditure (and a half-decent spring), they have every chance of making the effort to get them drilled a worthwhile exercise.

Any of my winter OSR drilled before 18 August looks good. Between then and 28 August, there’s some OK and some not so OK. Most drilled after 28 August has been written off. ‘Nuff said.

The weather is still hindering operations as we move towards the spring.

Storm Ciara, while bringing good drying winds among the rain which allowed seed-beds to dry, denied growers the opportunity to spray off seed-beds pre-drilling.

Storm Dennis, however, has topped up these areas again with more rain.

Cereal crops which have sat in water, whether now dry or not will have suffered root pruning to some extent.

These areas are susceptible to damage from gramincides, both sulfonyl urea-based and non-sulfonyl urea. Please keep this in mind when assessing fields for spring herbicide applications.

For established crops, attention to crop nutrition will be more important this year to that in most other years.

Relatively warm, wet soils over the winter have seen soil nitrogen mineralise and leach. This, coupled with later drilling dates, will see autumn drilled cereal crops on the back foot already.

Rooting
High soil-moisture levels have reduced the plant’s initial desire to produce a deep root system, and, as such, these systems will need promoting to allow for nutrient uptake from depth when soils dry out in the spring, as well as giving crops good anchorage to guard against lodging.

Phosphite products will be used to promote rooting, and earlier than usual nitrogen has already been applied in places.

Take a spade out and start digging a few holes to determine whether the ground is at field capacity, or whether there are pans and layers of compaction which may be hindering drainage.

If this is the case, rather than planting a spring crop into poor soil conditions, which won’t provide much of a return, consider planting a cover crop.

This will help re-structure soils, control grassweeds and leave your soils in a good condition to establish a good first wheat in the autumn.

The bizarre season continues. It was surreal to see several drills working in late January and early February with some on heavy land.

It does seem a bit like Groundhog Day though, as seed again is sat in waterlogged soils with flooded areas across fields due to storms Ciara and Dennis that soon followed.

Some dry weather during January allowed some long overdue spraying to take place. It was also a time to assess which parts or whole fields were to be written off due to poor establishment.

Headlands on heavier land are particularly poor, and often there are bare patches across fields where seed was saturated for long periods of time.  The pub yield bragging rights will have to be revised downwards this year.

Understandably, the issues of crop establishment and viability have been the focus of attention. However, grassweeds – such as blackgrass and ryegrass – are set to rear their ugly heads this summer, as there has been little opportunity to apply herbicides for their control.

Thin crops are also not going to provide sufficient crop competition against these weeds. Any remaining herbicides to be applied will serve to limit the yield losses from these weeds, rather than expect to achieve more than 98% control.

Oilseed rape
Oilseed rape crops range from “is that a crop in that field?” to those which are well established and shin high. It was good to see propyzamide and fungicides applied last month.

In some cases the propyzamide has been the only herbicide applied for blackgrass control so far, and it will have to work extremely hard to control these well-tillered plants.

The crop itself will eventually hide the blackgrass in the bottom of the crop. But there is likely to be a higher-than-average blackgrass seed return this summer, so following cultivations will need careful management.

Pigeons are proving to be a persistent nuisance on many oilseed rape crops. Cabbage stem flea beetle larvae are also easy to find in plants posing a more sinister threat to crop yield potential.

By the time land has dried following storm Dennis, many oilseed rape and winter cereal crops will be ready to receive their first dose of nitrogen.

Crops which require nitrogen to be held back, due to large canopies, are few and far between this season.

At the time of writing, storm Dennis has just passed through. Ground is as wet as it has been all winter and any prospects of carrying out any field work, in the short term, is zero.

Crop areas going into the spring are down on where we would normally expect to be. Some of this is due to crops that were due to be planted, but have not been, and some is due to areas that have been planted, but have subsequently failed due to waterlogging.

Those crops that have successfully come through the winter are generally less well developed than we would normally expect them to be at this time of year. As soon as the soil dries out enough to allow us field access, we will need to prioritise nitrogen applications.

As crops were planted later and are less well developed, the potential for lodging is going to be lower than it has been for the past few seasons. It will, therefore, be reasonably safe to apply useful amounts of nitrogen to these more backward crops, in order to generate biomass to drive yield potential.

It is also probable that the crops may require more nitrogen this season, due to wet weather related in field losses of nitrogen over the winter.

Signs of disease
Although the winter has been wet, it has also been mild and this has allowed some of the wet weather diseases to establish themselves in the crops. Rhynchosporium is evident in winter barleys, septoria tritici is in many wheat crops, and many of the oat crops are showing high levels of septoria avenae.

T0 applications will be required in these crops where disease is already prevalent. Many of the crops have yet to receive any herbicide and/or an aphicide for barley yellow dwarf virus (BYDV) control. Where grassweeds are a problem, it is a situation that will need to be remedied at the earliest opportunity, although when that will be is still not clear due to the ongoing appalling weather.

For those of us old enough to remember how bad BYDV can be, the recommendation would still be to apply an aphicide to crops that were drilled in the early autumn, but have not yet had an aphicide applied. In the South West, we tend to be more severely affected by BYDV than much of the rest of the UK.

Hopefully, by the time I next contribute, we will have moved into a drier spell of weather, the spring workload will have started and the business of applying the correct spring inputs will have begun.